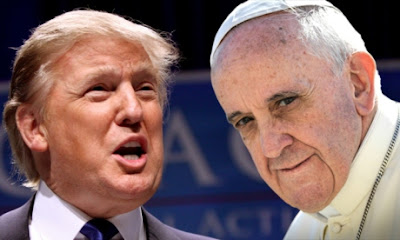 As a former Roman Catholic, I hold no love for the Church hierarchy composed largely of bitter old men who desperately cling to a 12th century understanding of science and human sexuality, often denying their own sexual orientation due to religious brainwashing or a hunger for power and position.  That said, many rank and file American Catholics differ greatly with the hierarchy's position on LGBT rights, contraception and a many other issues.  Likewise, other than extreme right wing Catholics, a majority of American Catholics reject the hate and fear based religious beliefs so loved by Christofascists and evangelical Christians.  With Donald Trump's self-prostitution of himself to the Christofascists and far right Protestants and his embrace of Catholic Church positions that are favored by a majority of Catholics, Trump has perhaps unintentionally alienated much of the Catholic vote.  Here are excerpts from a piece in Religion Dispatches that looks at the phenomenon:

Catholics now represent the latest demographic challenge for Donald Trump’s presidential ambitions. As the Washington Post recently reported, a poll from the Public Religion Research Institute found that Catholic voters preferred Hillary Clinton to Trump by a crushing 23 percent margin, 55-32. With less than a third of Catholics intending to vote for him, Trump has fallen well below the support GOP candidates typically enjoy from Catholic voters. George W. Bush won the Catholic vote in his 2004 reelection, 52-47. Although John McCain and Mitt Romney both lost among Catholic voters, they still managed to win 45 percent and 48 percent, respectively.

Why have Catholic voters rejected Trump? All year Catholic commentators and media outlets have provided their thoughts, but they have largely been overlooked by a mainstream media more fascinated by the story of evangelicals and Trump. As early as August 2015, the independent Catholic news site Crux noted that Trump’s aggressive anti-immigration stance put him at odds with Catholic bishops who were lobbying Congress to pass comprehensive immigration reform.

Writing in National Review earlier this summer, the political scientist Michael J. New commented that Trump’s “Catholic problem” likely stemmed from Trump’s harsh rhetoric on Latino immigrants who many American Catholics see positively as the future of their church, but also because of Trump’s attacks on Pope Francis.

After Trump selected Mike Pence as his running mate, Christopher Hale, the executive director of Catholics in Alliance for the Common Good, called the Trump-Pence ticket the “most anti-Catholic GOP presidential ticket in modern history” because of not only Trump’s many shortcomings but also Pence’s record of blocking the Catholic Church’s efforts to resettle Syrian refugees in Indiana.

Trump’s poor standing with Catholic voters resembles his “Mormon problem,” as I have written about. Taken together, the Catholic and Mormon rejection of Trump also further spotlights the embarrassment of evangelical support for the Donald.

Mark Rozell argued we were seeing a “splitting apart” of the coalition of evangelicals and conservative Catholics who have voted together for Republican candidates for nearly four decades. If polling patterns hold up in November, 2016 may yield the greatest difference between Catholic and evangelical voting since the 1960 election where at least 75 percent of evangelicals voted for Richard Nixon over John F. Kennedy compared to only 18 percent of Catholics.

[A]s I’ve argued in my recent book We Gather Together, the evangelical-Catholic political alliance remained a fragile one, even when results from the ballot box made it appear more solid. Even as conservative Catholics drew to evangelicals on social issues, like abortion, their church often took political stances on matters like welfare and nuclear armament that put them in opposition to the Republican Party.

Now Trump threatens to disrupt that parity, sending the bulk of Catholic voters to the side of his opponent. What this means for the future of the Republican Party remains uncertain. But for now, Catholic rejection of Trump at least surely offers another withering rebuke of evangelicals’ support of a candidate who is nothing short of unacceptable.

Growing up Catholic one looked down on fundamentalist evangelicals who rightly or wrongly were viewed as ignorant and not true Christians.  Now, with evangelicals flocking to Trump, perhaps that view of evangelicals as ignorant bigots was perhaps accurate after all.
Posted by Michael-in-Norfolk at Sunday, September 18, 2016