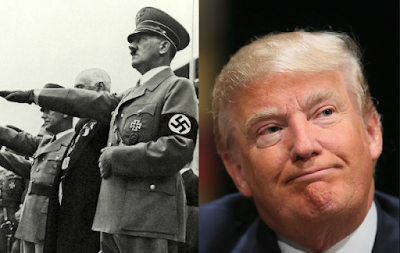 I am a huge supporter of gun control laws and believe America needs to take action akin to what Australia did in the mid-1990's to remove assault style weapons and other dangerous guns from public hands.  As a result, gun violence in Australia has dropped remarkably.   Guns and violence are a last resort when one's policies and positions cannot be supported by logic, reason, and morality. Yet, Donald Trump is courting the gun nuts of America and dangerously alluding that perhaps some of these psychopaths should "do something" to Hillary Clinton.  Friday evening, he dd so again perhaps in the hopes that one of his deranged followers might be spurred to action.  I do not advocate assassination, but if one were to occur during this election year, I'd be hoping it would be Trump's, not Clinton.  The Washington Post looks at Trump's latest dangerous provocations.  Here are highlights:

If you just glanced at those recaps and noted the word "again," you might think Trump had brought up his controversial "Second Amendment people" comment — the one about how Republicans could prevent a President Clinton from appointing liberal judges.
But Trump was actually repeating a formulation that he has used many times before, about how Clinton should have her guards disarm if she believes so strongly that guns aren't the answer to stopping violence.

And it's not even an argument that's unique to him. It's an extension of a favored argument used by the National Rifle Association -- "The only way to stop a bad guy with a gun is a good guy with a gun" -- and it's one the gun rights crowd has used with gusto against Democrats who support gun control, including President Obama.

So Trump was on well-trodden ground here. The difference Friday night, though, is that he took a comment that was worn and not all that interesting and spun it forward with just a few extra words, giving it new life by painting a more violent picture.

Let's recap what he has said about this, first from Friday night (emphasis ours):

[W]hat Trump said Friday night went beyond what he'd said previously. The "specter of violence" raised was much more directly. When Trump said, "Let's see what happens to her," and "It would be very dangerous," he's taking things to a new level and talking about the actual result — not just Clinton allegedly putting her money where her mouth is on how guns aren't safe.

This is classic Trump. He takes something old and dips it in controversy, letting the media raise a fuss about it. Then he accuses us of being too hard on him, and his supporters point out that he has said similar things before.

The funny thing is that Trump seems to think this works for him. He probably thinks that because the presidential race is close. But that's not because Trump is doing much right; it's because his opponent has her own problems.

The man is dangerous and if Americans are stupid and bigoted enough to elect him, I predict that the end of our democracy is well on the way to occurring.  I like to think most Americans are that stupid, but then one observes a Trump rally - of a conservative Christian church service - and my confidence in our citizenry crumbles.  Look at 1930's Germany if one wants to see where hatred of others and the courting of bigots can take a nation.

Posted by Michael-in-Norfolk at Sunday, September 18, 2016