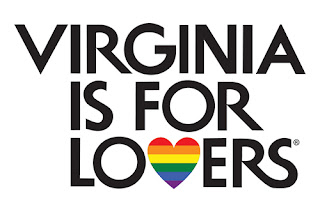 With Virginia being hammered by reduced federal government spending, one of the pushes of Gov. Terry McAuliffe has been to pursue the LGBT tourism dollar.  Indeed, McAuliffe has set up and LGBT Tourism Commission (on which some of our friends currently serve) and, unlike members of the Virginia GOP who continue to prostitute themselves to Christian hate groups and extremists, he realizes that being welcoming to all makes good business sense.  A piece in the Daily Press looks at this common sense effort that more parts of Virginia need to embrace (after years of lagging, Norfolk has realized the attractiveness of welcoming the pink dollar).  Of course, the current anti-LGBT toxicity reigning in North Carolina makes Virginia destinations look even more attractive to many living in the mid-Atlantic region.  Here are highlights:

RICHMOND – You can now buy "Virginia is for Lovers" trucker hats with a gay pride flag incorporated into the state's iconic tourism pitch.

The hat, and other state swag, is part of a new branding effort targeting LGBT tourists. There's a new web page highlighting events and destinations that have self-identified as LGBT friendly and a new resource guide for businesses looking to cash in.

The Virginia Tourism Corporation rolled out the campaign heading into this weekend, just ahead of the Virginia Pridefest in Richmond. But this is no limited-time event.

"This is going to be fully integrated in all our marketing, from top to bottom," tourism corporation spokeswoman Caroline Logan said. "This will be going on forever as far as we're concerned."

Eight other states have done something similar, but Virginia is the first one in the South, unless you count Florida. The campaign has been two years in the making, started by a push from Gov. Terry McAuliffe, who made clear from before he took office that he wants everyone to visit Virginia, and to leave lots money.

LGBT tourists – and that stands for lesbian, gay, bisexual and transgender – make up 10 percent of the U.S. tourism market, Logan said. They spend somewhere around $57 billion a year on travel and tourism, she said.

"They travel more and they stay longer and they spend more money," she said.

Logan said campaign feedback has been positive, but the effort is bound to be controversial for some.

Businesses and events have to opt into this particular marketing campaign, just as they do for other targeted state campaigns. The database of places to stay included 120 locations on rollout. Among other things, the website features a picture of McAuliffe marrying a lesbian couple.

In addition to the web page and database, the tourism corporation has created an LGBT Tourism Resource Guide for state businesses in the tourism industry, which generated an estimated $23 billion in spending last year in the state.

As noted, here's why courting the LGBT tourism dollar makes sense: "they travel more, stay longer and spend more money."  Only a fool - or religious extremist of GOP political whore - would not welcome that kind of traveler.

Posted by Michael-in-Norfolk at Saturday, September 24, 2016