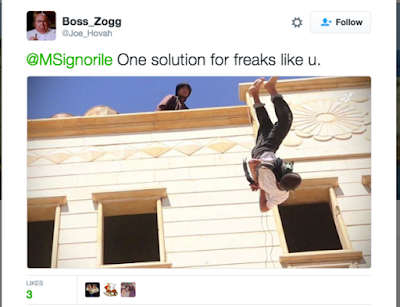 Michelangelo Signorile heads up Huffington Post's "Gay Voices" page and is a radio show host.  He writes on and discusses politics frequently.  He's a Facebook friend and we've spoken on the telephone before concerning closeted Republicans (for newer readers, I helped out former Virginia 2nd District Congressman Ed Schrock), so I take Michelangelo's word at face value.  As a result, his description of his recent online encounters with Donald Trump's Alt-Right followers is all the more unsettling. Here are excerpts from his recent post at Huffington Post (be sure to read the entire post to see all of the hate and ugliness of trump supporters):

Last week I tweeted my opinion of Jimmy Fallon having Donald Trump on his show, where Fallon failed to ask a tough question while he played with Trump’s hair.  The tweet was widely shared. A lot of people clearly agreed.

But not Trump’s online armies on the alt-right, energetic hordes of nativists, white supremacists, anti-Semites and, yes, homophobes whom Trump has emboldened.

Within a matter of minutes I was under full-blown assault from a stream of haters tweeting their anger, often with homophobic, racist and misogynistic slurs. At first I blocked them, but the effort became futile as they poured in every few seconds. This was similar to the anti-semitic attacks on Twitter that New York Times editor Jonathan Weisman, journalist Julia Ioffe and others have experienced from Trump’s alt-right warriors.

Many of those tweeting me had images of Trump or his campaign’s logo as their avatars or as the banner of their pages. A large number had renamed themselves with the word “deplorable” – “Deplorable Garrett,” “Mr. Deplorable” and so on – taking Hillary Clinton’s accurate criticism of the bigots Trump has brought into his campaign and turning it into a badge of honor.

One of several threats of violence and death streamed in, including from “Boss Zogg,” who suggested, “One solution for freaks like u,” above an image of a man being thrown from a rooftop, in what looked like photos that have been identified as depictions of ISIS executioners killing gay men.

“Shitlord,” who identifies himself as a member of the #AltReich, asked, “Are you a Jew?” Hours later, he asked again, “Are you a pig-faced boy?” The next day he wrote to say, “Jew detected.” (I’m happy to be Jewish on Twitter, but I think my name very clearly shows I’m as Italian as they come, revealing how the hate even defies basic logic.) Shitlord’s bio also says, “I identify as an “#AttackHelicopter.” This is a now well-known meme meant to mock sexual and gender identity.

Their own egos, like Trump’s, are so fragile, their own sense of masculinity so threatened, that they engage in acts of domination to be big again. They’re feeling completely empowered to do so by the bully-in-chief, Trump. And that was just the men. The few women who wrote aped the guys, sometimes sending out even nastier barbs, as if they’re trying to prove they can be just as ugly.

The anger and animus toward LGBT people from these Trump supporters – many of them young – belies the idiotic and dangerous media narrative that posits Trump as “more accepting on gay issues” than other Republicans. (To these Trump supporters, any mention Trump makes of “LGBTQ people” is acceptable, laughablepandering to win the election, as he wink-winks and nudge-nudges to them, as he has on other issues, from deportation to birtherism.)

There is no question that many of the people who may very well elect Donald Trump ― particularly if third party candidates siphon off enough votes of millions of young people ― are as hellbent on rolling back LGBT rights as they are about rolling back much else. To them, making America great again also means shoving LGBT people back into the closet. And they’ll make sure Trump includes that in his radical, frightening realignment of the nation.

These "patriots" and "real Americans" bear a frightening similarity to the thugs and haters in Germany who rallied to Hitler's calls for discrimination and ultimately violence and war.   Like Kathleen Parker, I do not understand how decent and moral people can support Donald Trump.

Posted by Michael-in-Norfolk at Tuesday, September 20, 2016