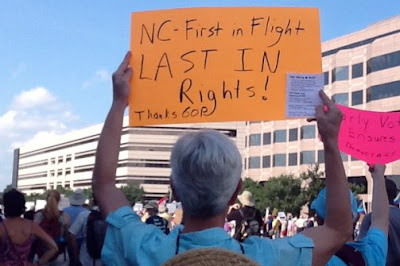 Having just returned from staying in North Carolina where the husband and I attended a family wedding, I am not sure exactly how to interpret  a resolution by the North Carolina Restaurant and Hotel Association ("NCRLA") calling for the city of Charlotte to repeal its pro-LGBT ordinance while also calling on GOP Governor Pat McCrory to convene a special session of the legislature to repeal HB2 in its entirety.  Obviously, the call for the repeal of HB2 is a positive, but repeal of Charlotte's ordinance seems to be a betrayal aimed at appeasing the hate groups that conspired with the North Carolina Republican Party to enact HB2 in the first place. Yes, the hotel industry in North Carolina has suffered, at least in some areas, but the better solution to me is to declared war in North Carolina Republicans and to see they as many as possible are voted out of office in November and in every election afterwards. Frankly, the NRLA action doesn't make me inclined to visit North Carolina again anytime soon unless I absolutely have to do so. Here are highlights from NCRLA's press release:

The unintended consequences of Charlotte City Ordinance #7056 and House Bill 2 have taken a considerable toll on our state as a whole. The hospitality industry has become collateral damage in a fight it did not start or ask for. Restaurant and lodging businesses and their employees are suffering the adverse impact of these policies though lost business and wages.

The North Carolina Restaurant & Lodging Association (NCRLA) urges policy makers on all sides of this issue to work together to find resolution quickly. “NCRLA has received assurances this week from legislative leadership, that if the Charlotte City Council repeals Ordinance #7056 at their meeting on Monday, the General Assembly is prepared to meet in special session as early as next week to repeal House Bill 2,” said Lynn Minges, NCRLA president and CEO. “Furthermore, Governor Pat McCrory has assured NCRLA that he is willing to call legislators into a special session next week for this purpose if both the city and legislators have the votes for repeal,” she said.

The North Carolina Restaurant & Lodging Association calls on Charlotte City Council to repeal ordinance #7056 immediately, on Governor McCrory to convene a special session of the NC General Assembly, and on the NC House and Senate to repeal House Bill 2 in its entirety.

We . . . . also believe all elements of the debate should be carefully, thoroughly, and deliberately considered and evaluated through the immediate formation of a study commission.

I'd love to hear readers' thoughts.  I can't help but feel that NCRLA's only concern is one of money.  The association seemingly doesn't give a rat's ass about LGBT rights and the need for non-discrimination protections. Therefore, for now, we will continue to avoid North Carolina like a toxic plague until HB2 is repealed and Charlotte's ordinance is allowed to stand.  Charoltte's ordinance isn't the problem.  Rather it is the North Carolina Republican Party and the Christofascists to which it so willing prostitutes itself.  And yes, I did send a link to this post to NCRLA.  Others who want to express their views to NCRLA can do so here.
Posted by Michael-in-Norfolk at Sunday, September 18, 2016

If the NCRLA thinks that returning to the old days will get the dollars to return to NC, I'll bet they are mistaken. The rights that the boycotters are concerned about would still be denied if both bills are repealed.

I sympathize with Charlotte being boycotted, but there is no guarantee (or even probability) that the law would be repealed if Charlotte repealed its anti-dicrimination law, even if that was the immediate impetus of the sweeping Christianist pro-discrimination one.