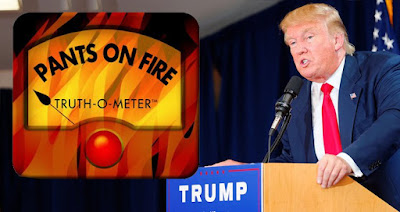 One of the most maddening thing about the 2016 election cycle is the failure of the news media to accurately report on the magnitude of the lies Donald Trump engages in daily.  The danger for the nation is that by not accurately reporting on the fact that Trump lies many times more than Clinton and that in the quest of appearing unbiased, the media has given Trump a free pass over and over again.   True, most of Trump's hard core base care nothing about the man's dishonesty so long as his statements and demagoguery play to their racial and social prejudices.  But after allowing - indeed assisting - America to go to war in Iraq based on lies that failed to be exposed and challenged, one would think that the mainstream media would have learned a lesson.  Monday night's first presidential debate will be a test of whether the media puts reporting the truth and exposing lies still matters or whether much of the media will prove to be Trump sycophants.  A column in the New York Times looks at this dangerous issue.  Here are highlights:

Here’s what we can be fairly sure will happen in Monday’s presidential debate: Donald Trump will lie repeatedly and grotesquely, on a variety of subjects. Meanwhile, Hillary Clinton might say a couple of untrue things. Or she might not.

Here’s what we don’t know: Will the moderators step in when Mr. Trump delivers one of his well-known, often reiterated falsehoods? If he claims, yet again, to have opposed the Iraq war from the beginning — which he didn’t — will he be called on it? If he claims to have renounced birtherism years ago, will the moderators note that he was still at it just a few months ago?  . . . . .  If he says one more time that America is the world’s most highly taxed country — which it isn’t — will anyone other than Mrs. Clinton say that it isn’t? And will media coverage after the debate convey the asymmetry of what went down?

[A]t this point we have long track records for both Mr. Trump and Mrs. Clinton; thanks to nonpartisan fact-checking operations like PolitiFact, we can even quantify the difference.

PolitiFact has examined 258 Trump statements and 255 Clinton statements and classified them on a scale ranging from “True” to “Pants on Fire.” One might quibble with some of the judgments, but they’re overwhelmingly in the ballpark. And they show two candidates living in different moral universes when it comes to truth-telling. Mr. Trump had 48 Pants on Fire ratings, Mrs. Clinton just six; the G.O.P. nominee had 89 False ratings, the Democrat 27.

Unless one candidate has a nervous breakdown or a religious conversion in the next few days, the debate will follow similar lines. So how should it be reported? . . . What I suggest is that reporters and news organizations treat time and attention span as a sort of capital budget that must be allocated across coverage.

And if the debate looks anything like the campaign so far, we know what that will mean: a news analysis that devotes at least five times as much space to Mr. Trump’s falsehoods as to Mrs. Clinton’s.

If your reaction is, “Oh, they can’t do that — it would look like partisan bias,” you have just demonstrated the huge problem with news coverage during this election. For I am not calling on the news media to take a side; I’m just calling on it to report what is actually happening, without regard for party. In fact, any reporting that doesn’t accurately reflect the huge honesty gap between the candidates amounts to misleading readers, giving them a distorted picture that favors the biggest liar.

Yet there are, of course, intense pressures on the news media to engage in that distortion. Point out a Trump lie and you will get some pretty amazing mail — and if we set aside the attacks on your race or ethnic group, accusations that you are a traitor, etc., most of it will declare that you are being a bad journalist because you don’t criticize both candidates equally.

One all-too-common response to such attacks involves abdicating responsibility for fact-checking entirely, and replacing it with theater criticism. . . . . news reporting should tell the public what really happened, not be devoted to speculation about how other people might react to what happened.

Now, what will I say if Mr. Trump lies less than I predict and Mrs. Clinton more? That’s easy: Tell it like it is. But don’t grade on a curve. If Mr. Trump lies only three times as much as Mrs. Clinton, the main story should still be that he lied a lot more than she did, not that he wasn’t quite as bad as expected.

Again, I’m not calling on the news media to take sides; journalists should simply do their job, which is to report the facts. It may not be easy — but doing the right thing rarely is.

Posted by Michael-in-Norfolk at Friday, September 23, 2016