Quote of the Day: Kathleen Parker on Trump's Unfitness 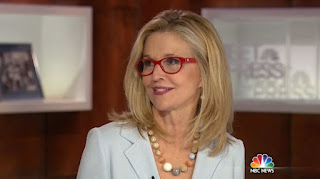 As a long time political activist and a former Republican, I remember when conservative columnist Kathleen Parker (pictured above) was viewed as a thoughtful, mainstream Republican.  She's still thoughtful and bound by a moral compass that I believe was once the norm among most Republicans of old.  Now, those values have been jettisoned by the GOP, especially among the Christofascist/white supremacist party base of today, and partisanship and jockeying for personal advancement take precedence over the welfare of the nation.  Ironically, these reality denying opportunists call themselves "patriots" even as they betray the nation and would willingly destroy what moral standing America still has in the world.  In a column in the Washington Post, Parker burst the bubble of those on the right who claim a conspiracy against narcissist and vulgarian in chief, Donald Trump, and defines why his defeat is a moral imperative.  Here are the key excerpts:

The fact that many of us columnists are in sync about Trump means only that a consensus has formed independently around facts to which all are privy. Finding Trump unfit to be president requires only a dispassionate view of those facts (a lack of knowledge, a dubious business record, questionable foreign relationships, an alleged university scam, concealment of tax returns) as well as an informed understanding of what his antics, style and temperament suggest about his character and mental health.

The mystery is how anyone finds him acceptable. The truth is, many who will vote for him don’t. They’ll vote Republican, not Trump, to protect the Supreme Court and apply the brakes to liberal policies. These considerations apparently outweigh concerns about a free press, our near-to-boiling melting pot and the harm Trump’s attitudes toward Muslims, among others, can bring to our nation.

As I recently wrote to a reader: I find Trump so uninformed, thin-skinned, volatile and divisive that opposing him has become for me a moral imperative. I sincerely believe he’s a threat to our security and our nation’s equilibrium, which has been dangling by a thread since 9/11.  This is what I think and where I stand.

Again, Parker is what a Republican used to be and she holds up a mirror in which those supporting Trump need to take a long, deep look at themselves and decide if they still stand for true morality and decency or if out of a deliberate embrace of hate and ignorance they will betray America.
Posted by Michael-in-Norfolk at Tuesday, September 20, 2016