Why Marco Rubio is Not a Moderate 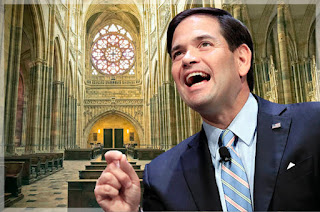 One of the biggest problems with politics today is the mainstream media's refusal to ask hard questions, engage in investigative journalism  such as that displayed in the movie Spotlight, and do more that simply mouthing the lies and extremism coming out of the mouths of politicians, especially Republicans.  Equally dangerous is the media's preference to jump on a story line and move it forward regardless of whether or not it bears any resemblance to the truth and/or reality.  Had the media done its job, the Iraq War and all the disasters that it precipitated could have been avoided.  As a piece in Salon points out, another case in point is the myth that Marco Rubio is a moderate Republican.  He's not, yet the media continues to support the lie.  Here are column highlights:


The press wrote this script a very long time ago: Senator Marco Rubio could become the favored establishment candidate in the Republican Party primary as party elites search for answers to the insurgent campaigns of outsiders Donald Trump and Sen. Ted Cruz.

That note has been hit especially hard in the press since the Trump circus arrived on the campaign trail last summer: The GOP is hoping for a tempered, pragmatic savior who can appeal to mainstream voters and help Republicans avoid disaster come November.

But what happens when the facts change but the script does not? What happens when a so-called Establishment candidate like Rubio starts espousing ugly, divisive rhetoric that’s synonymous with the darker regions of Fox News and the Republican Party? What happens when he adopts radical policy positions that just years ago would have been seen as borderline even for AM talk radio? (i.e. Outlawing abortions even for victims of rape and incest.)

I don’t think there’s any doubt that, overall, Rubio has benefited from very generous press coverage. Whether it’s the sweeping conclusion that he’s a “charismatic” communicator, the media happily running with his campaign’s spin that it essentially won in Iowa by finishing third, or the press’ steadfast refusal to delve deeply into the senator’s questionable finances, . . .

To me, establishment sounds like a placeholder for “moderate.” And in the case of Rubio, that’s a complete myth.

By placing the Florida senator in that wider establishment lane, pundits and reporters seem to suggest that he’s somehow part of a pragmatic Republican wing (does that even exist?) that practices common sense conservatism; that he’s separate and above those outlier disrupters like Trump and Cruz who embrace more political chaos.

But just because an extremist coats his divisiveness in “optimistic” language, doesn’t mean the campaign press should play along and portray him as something he’s clearly not.

A unifier? Rubio walked away from his one stab at establishment legislating with the immigration reform bill that he, as part of the Gang of Eight, helped shepherd through Congress. But quickly finding himself out step with a rabid Republican base that’s adopted anti-immigration as its defining litmus test, Rubio sprinted so far to the right on this issue that not only does he oppose his own reform proposal, he’s connecting the issue to the rise of ISIS.


As for Rubio’s potential appeal to young voters and moderates, a central part of the media’s establishment narrative, the senator’s increasingly right-wing agenda certainly raises doubts.
Rubio opposes expanding background checks for gun owners, even though 90 percent of Americans support the measure, as do an overwhelming majority of gun owners and even NRA members. He opposes marriage equality and “believes some kinds of businesses, like wedding photography, should be allowed to turn away gay customers.” He doesn’t want to increase the minimum wage (even though he thinks it’s currently too low). He doesn’t believe in climate change.
From PolitiFact [emphasis added]:

Rubio will support anti-abortion legislation that includes an exception for rape and incest, but he prefers that the procedure be illegal even in cases of rape and incest.

There may still be an establishment candidate lurking in the Republican field who can try to save the party from its own extremism, but based on the media’s apparent definition of Establishment, Rubio isn’t that person.

Posted by Michael-in-Norfolk at Friday, February 05, 2016

I imagine that most people with a sense of decency would disagree. "Moderate" is a question of context. Compared to what????