Spotlight: A Must See Movie 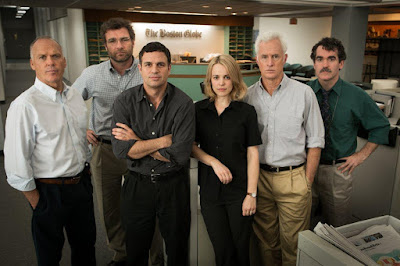 As long time readers know, I was raised Roman Catholic and once was a member of the Knights of Columbus and achieved the 4th Degree.  After the Boston Globe blew open the systemic, worldwide sex abuse scandal in 2002, I decided that I could be longer in good conscience be a part of such a corrupt and morally bankrupt institution.  In February 2002 I did a guest editorial in the Virginian Pilot in response a letter to the editor by then Bishop Richmond, Walter Sullivan's January 30, 2012, decrying a January 21 2002, editorial cartoon and claiming that the stories about the Church were "pure bigotry against the Catholic Church.''  The cartoon in question focused on the Catholic Church's track record in respect to pedophile clergy. Subsequently, I was attacked in letters to the editor, including a letter from a subordinate of Bishop Sullivan.  Time has proven the accuracy of the Globe story and sex abuse cover ups have been exposed virtually worldwide.  The ultimate hypocrisy is that subsequently Sullivan himself was implicated in the cover up of sexual abuse by a diocesan priest in the Diocese of Richmond that was among Sullivan's favorites.   The tenaciousness of a friend of mine and other victims of the priest in question finally resulted in a criminal prosecution against the priest and a plea deal.

For me, the timing of the Globe bomb shell was especially unique because it occurred when I was coming out and trying to purge myself of the psychological poison that had been inculcated into me as a Catholic child and youth.   Seeing the hypocrisy and moral bankruptcy of an institution that preached anti-gay bigotry and which had fueled so much of my self-hatred was a huge part of my ability to finally find self-acceptance and comfort with my sexual orientation.

Today, the husband and I went to see Spotlight, the movie that tells the story of how the Spotlight team at the Boston Globe exposed the truth and the opposition that they had to counter to tells story that desperately needed to be told.  The one of the big take away from the film is that no institution deserves unquestioning deference and that bad things happen when good people lack the courage to speak out.  Without the contrivance of attorneys, police officials, district attorneys, school heads and others, the Church would never have been able to so effectively cover up the sexual abuse of literally thousands and thousands of children and youth.

What is also distressing is the reality that NONE of the bishops and cardinals who conspired in the cover ups of abuse has been removed from office and tossed out by the Vatican.  Even today Cardinal Law who figured in the movie holds a plum position at the Vatican where he is safe from extradition for criminal prosecution.

This is a MUST see movie and those who most need to see it are the Catholics in the pews who (i) continue to bow and scrape to a Church hierarchy that deserves to respect or deference, and (ii) continue to support the criminal conspiracy orchestrated from the Vatican.  Pope Francis can shed crocodile tears and feign contrition, but until he removes ALL of the bishops and cardinals from office and who have participated in cover ups, his words will be meaningless.

For locals an added benefit is that Mark Ruffalo, a First Colonial High School (in Virginia Beach) grad has a major role.
Posted by Michael-in-Norfolk at Sunday, January 31, 2016

Tim in France here... always enjoy your posts.... still to this day.

I loved this film ...there is a reference to a book in the beginning of the film about a priest in Louisiana.. but..

I met a man who lives here in southern France named Ray Mouton.. who wrote a fact based novel about his story called "In God's House" .. it is another story that is as big as this ..in terms of what happened and how close they got to the Vatican.

It is actually a great read ..and I have spoken to Ray and learned that only one character is composite and the rest is all real.

Thank you as always for your work...and so sorry I missed you when you both came to Paris.