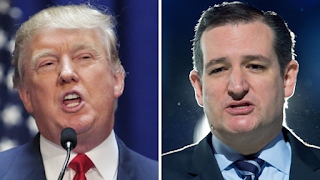 Despite the hopes, money, endorsements and perhaps even prayers of many Republicans in Congress, to date no so-called GOP establishment candidate has been able to blunt the popularity of Donald Trump and, in Iowa, Ted Cruz.  As noted before, many in the party believe that the nomination of either Cruz or Trump could be disastrous for  down ticket candidates and allow Democrats to regain control of the U.S. Senate as well as retain control of the White House.  As a piece in The Hill reports, the panic is growing.  The irony is that these same terrified politicians bear responsibility for creating the twin Frankenstein monsters they now fear.  Here are article highlights:


As all political eyes turn to the Iowa caucuses tonight, Donald Trump leads the race for the GOP nomination. He tops polls in Iowa and nationally.

So how can it be that the billionaire real estate mogul does not have a single endorsement from a Republican Senator or Congressman — even among the most hard-line conservatives?

This remains a startling fact, even as establishment party leaders have made it clear that they prefer Trump to a notoriously unpopular current member of the Senate, Ted Cruz (R- Texas).

“Ted Cruz is a rigid ideologue,” Dent told the New York Times. “Donald Trump is ideologically scattered and malleable. In my view, a more rigid ideology would have a much harder time assembling a winning general election coalition than the less doctrinaire candidate.”

The real reason for all the anxiety among Republicans about Trump and Cruz is the fear that either man could drag down the party in Congress.

With Trump or Cruz at the top of the GOP slate in November, the Democrats like their chances of taking back the House and Senate.

Ahead of the Iowa caucuses, the Democratic Congressional Campaign Committee (DCCC) released a memo outlining how they will target 13 vulnerable incumbent Republican congressmen by linking them to Trump’s extreme policies.

“Regardless of the ultimate Republican nominee, Trump and Cruz have hijacked the Republican narrative and driven the conversation to a place that is bad news for House Republicans in a presidential year,” a DCCC spokeswoman recently told reporters.

The Democrats need to win 30 House seats to retake the majority. This seems unlikely given the landscape of gerrymandered districts, which favors Republicans. But with a polarizing figure like Trump or Cruz as the GOP’s presidential nominee, it could happen.

Democrats have a much better chance of taking back the Senate. They need only to flip five seats currently held by Republicans. Of the 24 seats the GOP will be defending, seven of them are in states that President Obama carried in 2008 and 2012 — Illinois, Florida, Iowa, New Hampshire, Ohio, Pennsylvania and Wisconsin.

The incumbent Republican senators in those states would have an uphill battle to re-election even without having to explain their relationship to Trump or Cruz.

By the GOP convention, the question will not be about endorsements. It will be about how many Congressional Republicans openly reject Trump or Cruz, if either man is the nominee.