Are Evangelical Power Brokers Losing Their Control Over the GOP? 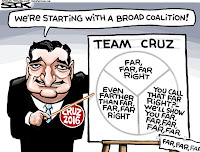 Even as almost all of the GOP presidential nomination contenders are shamelessly prostituting themselves to the Christofascists in the GOP party base, a piece in Slate argues that if Donald Trump wins in Iowa, it may be a sign that the poisonous influence and control of Christian extremists is finally waning.  Most of the right wing professional Christian class has lined up behind the very scary Ted Cruz and in advance of the caucuses voting .  Some are actively attacking Trump.  In the past the evangelicals and Christofascists have been able to deliver victory to their candidate in Iowa.  Should they fail to do so this election cycle, just maybe  their foul influence is waning.  It surely needs to wane in Virginia.  Here are highlights from Slate:

Last Wednesday evening, a few hundred Christian conservatives gathered at Noah’s Event Venue in suburban Des Moines for a rally with Texas Sen. Ted Cruz and former Texas Gov. Rick Perry. It featured leading figures from both the local and national religious right, there to make the case that the movement must unite behind Cruz. “Ted Cruz is one of us,” said Bob Vander Plaats, head of the FAMILY Leader, Iowa’s most influential evangelical organization [and a certified hate group].

[R]eligious conservative leaders lining up to stop the avaricious thrice-married billionaire from winning the Iowa caucuses. Leading female anti-abortion activists from organizations including the Susan B. Anthony List and Iowa Right to Life had already released an open letter urging Iowans to support anyone but Trump, writing that they were “disgusted by Mr. Trump’s treatment of individuals, women, in particular.” Christian talk radio hosts such as Michael Brown were lambasting Trump and lamenting the endorsement he received from Jerry Falwell Jr., . . . . Tony Perkins, head of the Family Research Council, had just endorsed Cruz—on Trump nemesis Megyn Kelly’s TV show, no less—before flying to Iowa for the Des Moines rally. There, the Cruz campaign unveiled Pro-Lifers for Cruz, a coalition with more than 17,000 members; Perkins is its chairman.

This sort of rhetoric has won over the heavily evangelical Republican Iowa caucuses in the past. In 2008, Mike Huckabee, with Vander Plaats’ endorsement, triumphed in Iowa. Four years later, Rick Santorum, also endorsed by Vander Plaats, prevailed. The outcome of this year’s Iowa caucus may tell us if the American religious right has retained its outsize influence in American politics or if a new populist force has supplanted it. Trump is demonstrating that many grassroots conservatives are far more comfortable with what Ted Cruz called “New York values” than anyone imagined. If the leaders of the Christian right can’t stop Trump, it could mark the end of the movement as we know it.

Ever since Ronald Reagan’s election in 1980, the religious right has been the primary vehicle for populist conservative energies in American politics. It hasn’t always won its battles with the establishment—neither Huckabee nor Santorum went on to win his party’s nomination. But it could legitimately claim to speak for the Republican grassroots.

Now, however, the movement’s ability to channel grassroots rage is being tested. Anti-abortion activists continue to make great strides, but social conservatives have been routed on the other great culture war battle, gay marriage; the issue increasingly fails to move young evangelicals. Meanwhile, the country as a whole is becoming less religious.

Leaders such as Focus on the Family founder James Dobson (who has endorsed Cruz) have nowhere near the influence they once did.  . . . . For those who abhor the goals of the religious right—banning abortion, overturning gay marriage, injecting Christianity into public schools—this may seem like good news. The rise of Trump, however, suggests that we should temper our satisfaction, as the religiously disconnected are not necessarily urbane secularists.

Should Trump triumph in Iowa, it will demonstrate that the Christian right, a crucial part of the conservative infrastructure, is similarly losing its relevance. It’s not just that Trump has been married three times; so was Newt Gingrich, who garnered significant religious conservative support four years ago. It’s not that Trump is an entertainer who used to be pro-choice; so was Ronald Reagan. What’s striking about Trump is that he doesn’t even try to speak in the idiom of the Christian conservative movement.

I asked the group whether it mattered to them that Trump is not particularly religious, has been married three times, and used to be pro-choice. “I don’t care about that,” Eric Struve said. “Separation of church and state,” added Trent Krough. Struve is quick to avow his faith in God, but he has a low opinion of religious conservative leaders. “A lot of them are kind of fake people, if you ask me,” he said. “Anybody can put on a face and act like they believe in God.”