Hillary Clinton Needs to Step Up Her Game 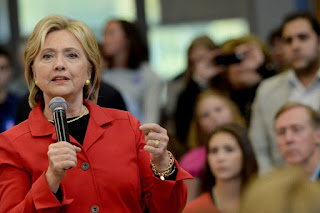 As one whose biggest fear is a GOP win in the presidential election in November, I am dismayed at Hillary Clinton's campaign to date which has yet to energize many in the Democratic base, especially younger voters.  She is by far the best qualified candidate based on her experience, but she cannot seem to find an electrifying message that will turn out voters in November to block a GOP nightmare for the country.  A column in the New York Times looks at this issue and problem.  Here are excerpts:

Late Monday, as the unfinished vote count suggested the slimmest of victories for Hillary Clinton, she stepped to a microphone, flashed an Oscar-worthy smile of triumph and told supporters that she was “breathing a big sigh of relief.”

She wasn’t. She isn’t. And she definitely shouldn’t be.

But Iowa demonstrated, yet again, what a flawed and tarnished candidate she is. And on the Republican side, the caucuses augured the possibility of a retreat from the party’s craziness and the rise of an adversary, Marco Rubio, who could give her trouble in a general-election matchup.

She should have trounced Sanders. Yes, he communicates authenticity to an electorate ravenous for it and has given potent voice to Americans’ economic angst. But little in his Senate career suggests that he’d be able to turn that oratory into remedy.

President Obama clearly prefers Clinton. And in a poll of Democrats showing up for the Iowa caucuses, well over half said that they wanted someone who would continue Obama’s agenda — which is the precise pledge that Clinton has been making over the last few weeks — while only about one-third said that they preferred someone more liberal.

Even so, Clinton appears to have edged out Sanders by mere decimal points. How to explain it?
Perhaps with the sturdiest truism of politics: Elections are about the future. And so much about Clinton screams the past.

A rally of hers that I attended in Iowa last week actually began with a highlights reel of Clinton through time, including plenty of footage from the 1990s. . . . The retrospective underscored her extraordinary experience. But nothing in her subsequent speech looked forward as stirringly as those images looked backward.

It’s the language of drudgery and duty rather than inspiration, and she can sound as if she’s collecting on an i.o.u. and asking voters to complete her trajectory rather than begin one of their own.

Bill Clinton may well garner applause, but every time he stumps for her, it’s an implicit promise to revisit yesterday, not to chart tomorrow.

For months Democrats have been heartened by the absurdity with which Donald Trump infused the Republican primary and by the prospect of him or Ted Cruz as the party’s nominee. But his second-place showing could be his twilight, and Rubio’s strong third-place finish supports the scenario that he’s the one.

He poses a bigger threat to Clinton. He understands that she, like Jeb Bush, is an awkward fit for the national mood, and he’d try to take advantage of that. He leans hard on his youth. He talks about a new generation.

Clinton needs to persuade voters that as much as they’ve seen of her, she can still lead them to a place they’ve not yet seen. She hasn’t succeeded, and she slogs on from Iowa much as she did eight years ago: with more to prove than to savor.

Posted by Michael-in-Norfolk at Wednesday, February 03, 2016