Both Parties Are Facing Hostile Takeovers 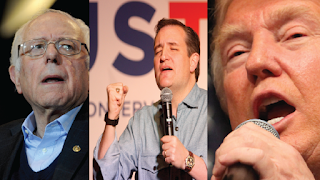 With the results in from Iowa  - a state that is no longer remotely representative of America demographically or culturally - one thing is clear: the establishment wings of both the GOP and the Democrat parties are seeing their king/queen makers challenged.  There is a great deal of anger and desire for change amongst voters, but their seems to be little concern, especially on the right, as to who can bring in logical and rational change.  In Iowa, the lack of rationality should comer as no surprise given the large number of evangelical Christians who are by definition in my view, irrational.   Their desires for a quasi-Christian theocracy and a return to the social norms of the 1950's is simply not acceptable to most Americans.  A piece in Mother Jones looks at the insurgencies in both major political parties.  Here are highlights:


[B]oth major political parties were on the verge of hostile takeovers. By night's end, the Democratic establishment and Hillary Clinton had apparently held the threat at bay—barely!—with the former secretary of state seemingly defeating Sen. Bernie Sanders, a self-professed democratic socialist channeling populist ire, by a small number of votes in what was almost a tie. On the Republican side, Sen. Ted Cruz, a nemesis of the GOP establishment, prevailed in Iowa the traditional way by rounding up evangelical and social conservative voters, and Donald Trump, the reality television tycoon, placed a close second (28 to 24 percent) with his they're-all-losers schtick—meaning that half of Republican voters rebelled against their party's poohbahs.

But this convenient, soundbite-friendly description of what's going on is too easy an explanation, for the supposed outsider energy in each party is different, particularly when it comes to Trump.

Let's start with the Dems. Sure, Sanders called for smashing up the big-money establishment and implied (strongly!) that Clinton, a Washington insider who has pocketed campaign cash and speaking fees from Wall Street, was part of the corrupt system. Not to take anything away from Sanders' populist message and his campaign's delivery, but he was able to take advantage of—that is, speak to—a pre-existing and ever restless ideological bloc within the Democratic primary electorate: progressives. . . . . 44 percent of Democrats call themselves liberals. This number has been on a steady rise since 2000, when only 29 percent claimed that label. So as several Democratic strategists have pointed out to me in recent weeks—including those backing and not backing Clinton—Sanders began with a big potential base to tap.

Sanders had an opening to present himself as this year's true progressive model and a cool alternative to the ideologically-suspect and baggage-heavy Clinton. Voila! He made a connection with a major Democratic subset that has always been there. Forget about Iowa for a moment—especially now that this unrepresentative event is done—and look at the average of the national polls in the Democratic race. Clinton leads Sanders, 52 to 37 percent. Sanders' take is darn close to that 40-percent mark long associated with the progressive wing.

Cruz did something similar to Sanders: he appealed to an ideological bloc that pines for a champion. With the collapse of Ben Carson, who at one point led the GOP pack in Iowa, Cruz, who fielded an effective on-the-ground organization, was able to consolidate much of the social conservative vote.


Just as there is a progressive base in the Democratic Party, there is a conservative foundation in the GOP, and those right-wing heroes of yesteryear won the Republican presidential contests (respectively in 1964 and 1980) by rallying the conservative grassroots within the GOP.  . . . .
Cruz adopted this model, and he fared well in a state that has in recent years rewarded Republicans who appeal to the religious right. He's an outsider in Washington, but not within this historical framework.

Trump's play was not to become the leader of the party's conservative wing. He's been waging a cultural revolution, not an ideological rebellion, within the GOP. His main argument, such as it is, is not that the government is too big, but that everyone in government—and just about everyone who doesn't agree with him—is stupid. And he's a winner. (Well, at least until Monday night.) With his campaign, the political is the personal. His policy prescriptions, if they deserve to be called that, do not hew to a clear ideological line.

Trump is a protest candidate protesting...just about everything, as he peddles bigotry by pushing a ban on Muslims entering the United States. He's not playing to the ideological voters of the GOP, but to the angry ones. His target audience: people who resent pushing 1 for English and 2 for Spanish. And I'm guessing many of these people have spent the last eight years detesting President Barack Obama, suspecting he's some kind of secret Muslim, Kenya-born socialist who has a clandestine plan for destroying the United States of America. This hatred of Obama has been encouraged and exploited by leading Republicans who gained power in Washington with the tea party. These establishment GOPers giggled with delight as their mad-as-hell voters rushed to the polls, . . . . . They fed the beast. But that only created hunger for more hatred.

Enter Trump, who first auditioned for this role as a birther.. . . . The infuriated GOP voters who had bought the Republican propaganda that Obama has destroyed the United States gobbled all this up. . . . . They are looking for a venter-in-chief who is as furious as they are and who promises that he and the nation will win, win, win.

The GOP unleashed the dogs of resentment and rage. And a bombastic, arrogant, demagogue billionaire shouted to them, "Follow me, not those louts in Washington." Trump's takeover of the GOP was going smoothly until Cruz, who has also tried to capitalize on right-wing resentment, bested Trump in Iowa, and Marco Rubio, a tea partier turned establishment favorite, came within 3,000 votes of bumping Trump to third. Now Trump's going to have to try harder.

After Iowa, the Democratic Party and Clinton are facing a fierce ideological challenge from an unlikely and previously underestimated source, while the Republican old guard is confronted by Cruz's traditional assault and Trump's unconventional attack. It's the season of disruption.

Posted by Michael-in-Norfolk at Tuesday, February 02, 2016