Choosing Between Clinton and Sanders 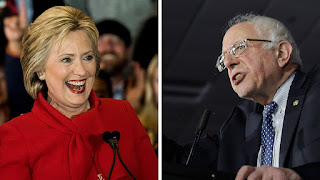 Like many who find all of the Republican presidential candidates abhorrent and view a GOP victory in November as nothing short of a disaster for most Americans (even those swayed by pandering to racism and religious extremism into backing the GOP).  Thus, the choice boils down to either Bernie Sanders or Hillary Clinton - and who is most electable and who could actually push through policies and initiatives that might halt America's rush toward banana republic wealth disparities and increasingly vulture capitalist driven economy that leaves the vast majority of citizens behind.  A piece in the Washington Post sums up the competing attractions of Clinton and Sanders.  Here are excerpts:

The Democratic contest is far more subtle [compared to the GOP circus] and, as a result, intellectually interesting. The obvious contours of the race are defined by Hillary Clinton’s identity as a moderate progressive and Bernie Sanders’s embrace of democratic socialism.

But there is less distance between Sanders and Clinton than meets the eye. Their sharpest programmatic differences (other than on Sanders’s mixed gun-control record) are over his sweeping ideas: breaking up the largest banks, establishing a single-payer health-care system and providing universal free college education. These disagreements are closely connected to their competing theories of change.

Clinton believes in change through incremental steps: toughening financial regulation, building on Obamacare, expanding access to scholarships and grants without making college free for everyone. One-step-at-a-time reform is the best way to reach a larger goal, she believes. And proposals that are too big are doomed to fail — politically for sure, and probably substantively as well.

Thus her signature critique of Sanders. “In theory, there’s a lot to like about some of his ideas,” she says, and then the hammer falls: “I’m not interested in ideas that sound good on paper but will never make it in the real world.”

Sanders, by contrast, has long believed that the current configuration of power needs to be overthrown (peacefully, through the ballot box) to make progressive reform possible. It’s why he focuses so much on breaking the corrupting power of big money in politics. He believes that loosening the Republicans’ grip on working-class voters requires initiatives that will truly shake things up, and that only the mobilization of new voters will change the nature of representation in Washington.

Sanders added: “The Republican Party right now in Washington is highly disciplined, very, very well-funded, and adheres to more or less the Koch brother position. You’re not gonna change them in Washington. The only way that they are changed is by educating, organizing, and what I call a political revolution.”

Now here’s why so many Democrats like both of them: Most share Clinton’s view that gradual reform is the most practical way forward. But most also agree with Sanders that even moderately progressive steps will be stymied if money’s influence is left unchecked, if progressives do not find new ways of organizing and mobilizing, and if so many white working-class voters continue to support Republicans.

Call it the dialectical primary: Democrats are searching for a synthesis between reform and revolution.