Will Marco Rubio Change His Position on Gay Marriage? 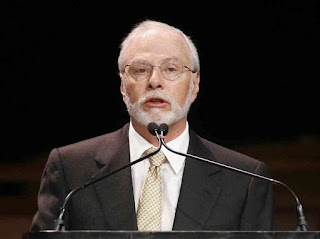 In Iowa Marco Rubio was prostituting himself to the far right Christofascists big time in an effort to win over the evangelical vote.  Now, with a strong third place finish, his prospects look improved and some of his big money backers may be more inclined to hand over more financial backing.  One major player that Rubio may need to placate is billionaire Paul Singer who is a strong proponent of same sex marriage and gay rights.  A piece in Forward.com looks at the dilemma that may soon face Rubio.  Here are excerpts:

In an election cycle dominated by mega-donors, Sheldon Adelson, the brash, pro-Israel Las Vegas casino mogul, has become the symbol of powerful billionaires courted by candidates for their game-changing financial support.

But out on the East Coast there is another, quieter Jewish mega-donor drawing attention among Republicans: Paul Singer, the New York hedge fund billionaire, philanthropist and political player who is betting on Marco Rubio as the candidate able to lead his party back to the White House.
Now, with Rubio’s strong third-place finish in the Iowa caucus, Singer’s early backing for the Florida senator looks more important than ever for the ballast it has given his bid—and the influence that the early backing is likely to give Singer.

Singer is described as calculated and methodical, mainstream in Republican terms, and with surprising liberal streaks lining his strong fiscal conservatism. He is also known for his caution in political giving.

Moreover, Singer is anything but a single-issue donor. In fact, some of the issues close to his heart can at times seem difficult to reconcile. But Singer manages to be both a major donor of a Republican Party shifting gradually toward the right and a prominent champion of gay and lesbian rights without losing his political sway.


Singer’s net worth value is estimated at $2.1 billion, making him, according to Forbes, the 327th richest person in America.

The billionaire investor’s political involvements mirror his activist style of doing business. Not only does he put up big money himself — as much as $17 million in the past 25 years — he also makes sure to engage other donors, bundle for his candidates and strictly screen politicians before putting his dollars behind their campaigns.

Singer became immersed in gay rights issues following his gay son’s struggle to marry. He has since been an advocate for marriage equality and a key financial backer of LGBT rights organizations. In some cases, Singer has served as a bridge to conservatives and Republican donors for these groups, allowing them to connect to supporters on the right who had previously been beyond reach.

“It wasn’t just the money,” said Evan Wolfson, founder and president of Freedom to Marry. “Singer and his team were key strategic partners to win over conservatives and to use his leadership to bring in right-of-center funders.”

As the primary season begins in earnest with the Iowa caucuses, Singer intends to continue helping his candidate, Rubio, win over donors and voters. Singer, the source close to him said, has “real concerns” regarding the other candidates’ prospects of winning the general elections. This includes Donald Trump, the current leader of the GOP pack, who, in Singer’s eyes, “is not a Republican.”

Of course, if any of the gay rumors currently be circulated about Rubio are true, he'd be wise to moderate his positions to avoid being outed at an inopportune time.
Posted by Michael-in-Norfolk at Tuesday, February 02, 2016