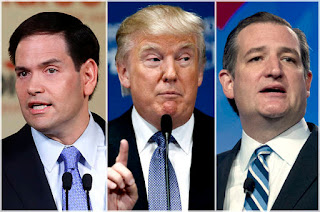 Today's Republican Party is a train wreck that ought to be sending chills down the spines of rational Americans.  Sadly, much of the mainstream media is doing little or nothing to expose the GOP insanity or to challenge the ugliness of the policies advocated by the top GOP presidential candidates.  The GOP was launched on its path to insanity by the welcoming of Christofascists - a group that is by definition irrational and motivated by fear and hatred of others - with FOX News, a/k/a Faux News, and right wing talk radio ratcheting up the level of the insanity.  The mainstream media assisted by default by never challenging hate merchants (e.g., hate group leader Tony Perkins is still invited to give "Christian views" with no disclosure of or challenge of his white supremacists ties) and providing a platform for the dissemination of lies and deception.  As a piece in Salon notes, the media is still aiding and abetting extremism.  Here are highlights:

The political chattering class is largely obsessed with the “horse race” aspect of the Iowa caucuses (which historically have not done a very good of predicting the eventual Republican presidential nominee) and what the results there portend for New Hampshire and beyond. The dominant narrative is that the winnowing process has begun and that Trump, Cruz and Rubio represent three distinct parts of the Republican Party’s electoral coalition. From this perspective, there are various “lanes” to the presidential nomination for the leading Republican candidates.

However, such a focus risks obscuring as much as it reveals about the Republican Party’s policies, specifically, and movement conservatism, more generally. . . . this outcome indicates a Republican Party that is cannibalizing itself internally, where no clear front-runner had truly emerged, and whose candidates are largely much more alike than they are different.

A focus on the horse-race narrative and an obsessive parsing of the differences between the 2016 Republican presidential primary candidates . . . . is potentially very dangerous because it risks overlooking the extreme, radical and dangerous right-wing policy proposals that unite the field.

Almost all of the 2016 Republican presidential primary candidates share the following beliefs:

1. That the United States should bomb and kill many thousands of innocent people in the Middle East and elsewhere in order to supposedly stop the spread of ISIS and other terrorist organizations.

2. Torturing suspected terrorists—even though such acts are both immoral and ineffective in retrieving actionable intelligence information—is acceptable.

4. They are anti-science and do not believe that global warming is a real, scientifically proven, empirical fact.

5. Tax cuts for the 1 percent and the American oligarchs should be expanded and protected while the social safety net and workers’ rights are further limited.

6. The Affordable Care Act should be reversed, and action that will result in millions of Americans being left without insurance and forced to seek aid and assistance from private charities.

7. Muslim Americans should be tracked by a national database as suspected “terrorists.”

8. Basic government functions should be privatized and protecting “the commons” should be made the responsibility of profit motivated corporations.

9. Women should be denied the basic human right of making their own reproductive health choices.

10. They are “law and order” racial authoritarians who support police thuggery and brutality against black and brown Americans, the poor and other marginalized groups.

[M]ovement conservatism seeks to undo the consensus politics of the World War II and post-World War II era because it views the great successes of the New Deal, the Great Society and the civil rights movement(s) as a threat to the excesses of unrestrained capitalism and white male power.

The GOP’s activist base is extremely out of sync with the mainstream of American public opinion; the party has dragged the Democratic Party to the right; the right-wing news entertainment complex has created a state of epistemic closure for its public that is immune from fact or reason, thus the latter advocates for politically untenable goals; and the Republican Party’s candidates are left beholden to the most extreme elements in their own party…even as those policy positions are unpopular among the majority of American voters.

[T]he news media and the American public are still left with the fundamental question of how one of the country’s two institutional political parties could be left after the Iowa caucuses with three front-runners who are, respectively, a proto-fascist, a Christian theocrat and an Ayn Rand neoliberal who wants to privatize all aspects of public life while simultaneously waging war on the poor and working classes.

Worrying about “lanes” and paths to victory for Republican presidential candidates does nothing to address such basic and fundamental problems.