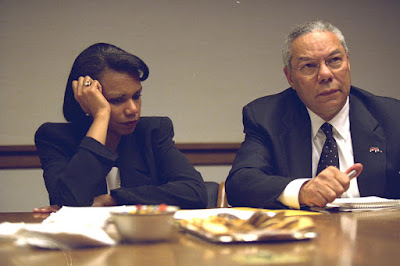 While it annoys me to no end that Hillary Clinton set her self up for the ongoing e-mail "scandal" - if she knew she was going to run for president why give the Republicans a toe hold? - I have always suspected that others have similarly utilized private e-mail while holding the position of Secretary of State or similarly sensitive positions.  Now, my suspicions have been confirmed by a piece at MSNBC that lays details of out how both Colin Powell and Condoleezza Rice utilized private e-mail while conducting official business during their tenure under the Bush/Cheney regime.  The take away?  The Congressional Republicans and GOP presidential candidates are using Hillary's shortsightedness to fuel a political witch hunt.  Here are highlights:

When the political world’s interest in Hillary Clinton’s State Department emails was near its peak, the Washington Post’s Chris Cillizza defended the media’s fascination with the story. “Democrats, ask yourself this,” Cillizza wrote in August. “If this was a former [Republican Secretary of State] and his/her private e-mail server, would it be a ‘non-story’?”
As a rule, I continue to believe that’s a smart way for political observers to look at every story. If the situations were reversed, how would you react to a controversy? If the accusations targeted someone you detest, as opposed to someone you like, would you see the story as legitimate?
Cillizza’s question wasn’t really a hypothetical. We learned nearly a year ago from a Politico article that former Secretary of State Colin Powell “also used a personal email account” during his State Department tenure. Several months later, MSNBC found that Powell conducted official business from his personal email account managed through his personal laptop.
“But wait,” Clinton’s critics in the media and Republican circles protest, “what about emails that were later deemed to include sensitive information?” NBC News reports today that both of the Bush/Cheney-era Secretaries of State fall into the same category.

None of this is to suggest Powell or Rice’s office is guilty of wrongdoing.
The political salience of news like this, however, is that Clinton’s critics would like voters to believe she’s at the center of some damaging “scandal” because of her approach to email management. These new details suggest Clinton’s practices were fairly common, and unless Republicans and the media are prepared to start condemning Powell and Rice with equal vigor – an unlikely scenario – it’s starting to look like this entire line of attack lacks merit.
Or as the NBC News report put it, the new findings “show that past secretaries of state and senior officials used personal accounts to conduct government business and occasionally allowed secrets to spill into the insecure traffic.”
As for Chris Cillizza’s question – if were talking about a former Republican Secretary of State, would it be a “non-story” – it would appear the answer is, “Yep.”
Rep. Elijah Cummings (D-Md.), the ranking member of the House Oversight Committee, said in a statement this morning, “Based on this new revelation, it is clear that the Republican investigations [into Clinton’s emails] are nothing more than a transparent political attempt to use taxpayer funds to target the Democratic candidate for president.”