How Trump Played the Log Cabin Republicans for Fools 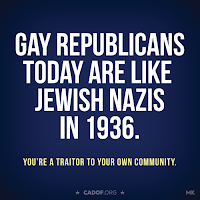 As a former GOP activist and sitting GOP city committee member for 8 years before I left the GOP in the face of the Christofascist takeover, I continue to be amazed at the delusions that predominate among the Log Cabin Republicans who somehow incredibly believe that they can somehow turn the GOP toward a more gay friendly stance.  The reality is that such a change will only happen literally over the dead bodies of the Christofascists.  And then there are the duplicitous GOP candidates who play the Log Cabin crowd for complete suckers.  The sad reality is that, if one is gay, being gay and supporting the GOP is about as insane as being a Jew in 1930's Germany and supporting the Nazi Party.  It is simple insanity.   A piece in Huffington Post looks at how Donald Trump played the Log Cabin Republicans for utter fools.  Here are article highlights:

Back in December, the Log Cabin Republicans (LCR) were absolutely giddy about the idea of Donald Trump as president.

Yes, he'd called Mexican immigrants "rapists." Yes, he'd made vile remarks about women. And yes, he'd said Muslims should be banned from entering the country. But as far as the gay GOP group was concerned, compared to most of the other GOP candidates, with their fire and brimstone, Trump was including gays in the straight white men's club merely by seeming to accept the Supreme Court's ruling on marriage equality, even if he disagreed with it. So, everyone else be damned.

Gregory T. Angelo, president of LCR, told Reuters in December, "He is one of the best, if not the best, pro-gay Republican candidates to ever run for the presidency."

But only a month later, Trump happily accepted the endorsement of evangelical leader and Liberty University president Jerry Falwell, Jr. -- about as close to an "enemy to the gay community" as you can get -- and Falwell now energetically campaigns for Trump. And then this past weekend, courting evangelicals in Iowa, Trump said he will work to reverse the Supreme Court's marriage equality ruling, promising to put "certain judges on the bench" to make it happen.  And suddenly, LCR has gone silent on Trump. Woops!

But they've not been silent on Hillary Clinton. In fact, the group launched an ad over the weekend that attacks Clinton as someone who hasn't been there for the LGBT community "when it counted" and which promotes... Bernie Sanders!

Yes, the Log Cabin Republicans really think LGBT people should support democratic socialist Bernie Sanders and want him to win the presidency, right? Yeah, and Donald Trump is not a fascist.

LCR, in fact, got dumped by Trump as soon as Trump saw that many evangelicals would back him even though he's thrice married, can't quote bible verses accurately and owns and operates casinos. And now, trying to nail that vote down further -- and knowing that he'll need that constituency in South Carolina and beyond -- Trump has thrown gays under the same bus he threw Latinos and Muslims.

It doesn't matter what Donald Trump really believes . . . . He will say whatever it takes to get elected, knowing there are so many people so driven by anger and cult of personality that they'll support him, and he has no problem whipping up hate against other people in the process, emboldening those who discriminate.

The idea that any LGBT people could support Trump while he demagogues other minorities is not just sad; it's repellant. But the Log Cabin Republicans' thinking that he'd actually be "good for the gays" was also just plain deluded.