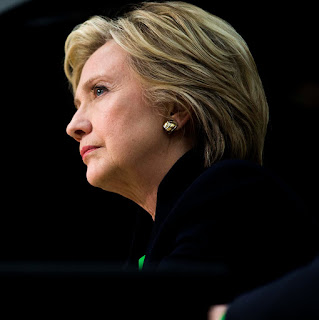 With the Iowa caucuses tomorrow, the New York Times today released its endorsement for Democrat Party Nominee: Hillary Clinton.   The piece in part states "Voters have the chance to choose one of the most broadly and deeply qualified presidential candidates in modern history."  Nowadays, I don't know if endorsements really carry much weight, but the piece does lay out a case for why Clinton is the better option for Democrats.  Yes, Sanders supporters will not be happy, but it is impossible to please everyone.  Here are editorial excerpts and readers can decide if they agree or not (share comments on the blog too):

For the past painful year, the Republican presidential contenders have been bombarding Americans with empty propaganda slogans and competing, bizarrely, to present themselves as the least experienced person for the most important elected job in the world. Democratic primary voters, on the other hand, after a substantive debate over real issues, have the chance to nominate one of the most broadly and deeply qualified presidential candidates in modern history.
Hillary Clinton would be the first woman nominated by a major party. She served as a senator from a major state (New York) and as secretary of state — not to mention her experience on the national stage as first lady with her brilliant and flawed husband, President Bill Clinton. The Times editorial board has endorsed her three times for federal office — twice for Senate and once in the 2008 Democratic presidential primary — and is doing so again with confidence and enthusiasm.

In the end, though, Mr. Sanders does not have the breadth of experience or policy ideas that Mrs. Clinton offers. His boldest proposals — to break up the banks and to start all over on health care reform with a Medicare-for-all system — have earned him support among alienated middle-class voters and young people. But his plans for achieving them aren’t realistic, while Mrs. Clinton has very good, and achievable, proposals in both areas.

Mrs. Clinton is a strong advocate of sensible and effective measures to combat the plague of firearms; Mr. Sanders’s record on guns is relatively weak. Her economic proposals for financial reform reflect a deep understanding of the 2010 Dodd-Frank financial reform act, including the ways in which it has fallen short. She supports changes that the country badly needs, like controls on high-frequency trading and stronger curbs on bank speculation in derivatives.

One of the most attractive parts of Mrs. Clinton’s economic platform is her pledge to support the well-being and rights of working Americans. Her lifelong fight for women bolsters her credibility in this area, since so many of the problems with labor law hit women the hardest, including those involving child care, paid sick leave, unstable schedules and low wages for tipped workers.

Her knowledge comes from a commitment to issues like reproductive rights that is decades old. She was well ahead of Mr. Sanders in calling for repeal of the Hyde Amendment, which severely limits federal money to pay for abortions for poor women.

As secretary of state, Mrs. Clinton worked tirelessly, and with important successes, for the nation’s benefit. She was the secretary President Obama needed and wanted: someone who knew leaders around the world, who brought star power as well as expertise to the table.

Mrs. Clinton can be more hawkish on the use of military power than Mr. Obama, as shown by her current call for a no-fly zone in Syria and her earlier support for arming and training Syrian rebels. We are not convinced that a no-fly zone is the right approach in Syria, but we have no doubt that Mrs. Clinton would use American military power effectively and with infinitely more care and wisdom than any of the leading Republican contenders.

Mrs. Clinton has honed a steeliness that will serve her well in negotiating with a difficult Congress on critically important issues like climate change. It will also help her weather what are certain to be more attacks from Republicans and, should she win the White House, the possibility of the same ideological opposition and personal animus that President Obama has endured.

Hillary Clinton is the right choice for the Democrats to present a vision for America that is radically different from the one that leading Republican candidates offer — a vision in which middle-class Americans have a real shot at prosperity, women’s rights are enhanced, undocumented immigrants are given a chance at legitimacy, international alliances are nurtured and the country is kept safe.