Donald Trump: The Last Whimper of the Angry White Man 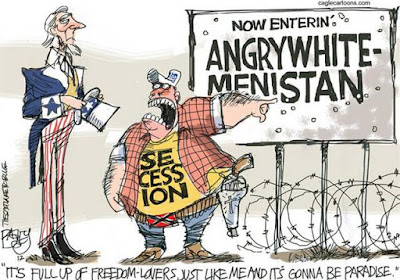 The Republican Party is at war with modernity.   The GOP wasn't always this way, but with the hijacking of the party base by the Christofascists and the Tea Party (which is largely Christofascists masquerading under a different label), modernity itself became the enemy.  Throw in angry white males who feel their once unchallenged privilege is under attack - by women, gays, racial minorities, and non-Christians., etc - and one has the  recipe for the insanity of today's Republican Party.  Enter Donald Trump to the stage with racist sound bites and other verbal diarrhea and one gets a surge for the Donald in the polls.  A piece in Salon looks at the sickness of the GOP and why Trump represents a dying gasp of angry white males.  Here are highlights:

Now that the first Republican debate is more than a week behind us, we should pause for a moment’s reflection on what we’ve learned about the party, its candidates and its electorate. If taken seriously, this question suggests others about the state of our national political media. None of the answers are very edifying, much less comforting.

Having entered the race in mid-June with a speech in which he implied that the Mexican government was targeting our Southern border with wave-upon-wave of “rapists” and other miscreants, Trump stayed the course with a luxurious blast of invective, a bloom of rhetorical fisticuffs that suggested a forensic version of Charles Sumner’s 1856 caning on the floor of the Senate.

Everyone agreed a crescendo of some sort was reached on the morning after the debate, when Trump, having tangled the night before with moderator (and Fox News anchor) Megyn Kelly, seemed to suggest that her “silly questions” were prompted by menstrual cramps.

Two facts about all this deserve special notice. The first is that the tenor of Trump’s rhetoric has been directly related to the trend in his poll numbers — the wilder and harsher the former, the higher he has climbed in the latter. The second is the desperate (and largely futile) struggle of our political media to make some sense of the first fact.

When you repeatedly get something wrong, you need an explanation  . . . . that explanation is the meme, repeated ad taedium if not ad nauseam, that the GOP base likes Trump because he seems as angry as it is. His pugnacious manner, his willingness to insult opponents — or just anyone who disagrees with him — his brusque tone and dismissive gestures: All these things, we’re told, are like catnip to the Republican faithful. Mostly older and white and male, and wholly pissed-off, these folks are tired of namby-pamby politicians who whine about “bipartisan solutions” and want to find ways to “work with the other side.”

As explanations go, this one isn’t completely off-track. It does get one (very important) thing right: the GOP base is mad as hell. But as a theory of Republican politics, it’s sort of like attempts to attribute the Napoleonic Wars to Bonaparte’s shame over his small stature. There has to be something more than anger at work in the GOP, because anger alone doesn’t explain the distinctive shape of its obsessions. The real question is this: What is it angry about?

Donald Trump is, in a sense, the perfect candidate for our political media. He is the culmination of the effort to divorce politics from thought, to depict it as simply a moment of neurotic display. Indeed, it is not hard to imagine that Trump really has no political ideas at all, outside of the conviction, common among the exploiting class, that government should always conduct itself in such a way as to maximize the value of his assets. Trump’s campaign is the latest episode in a life devoted to an endless exhibitionism: . . .

Trump is a self-promoter of genius, so it is no coincidence that he structured his campaign around a series of insults directed at Hispanics, a Vietnam-era POW, the Bush dynasty, and women. Each of these targets represents an actor of special significance in the haunted passion play that is the Tea Party mind.

A political party shapes its electorate as it shapes itself. The GOP as it exists today is the legacy of decisions made 50 years ago in the wake of white Southern reaction to the civil rights movement. To make itself attractive to the millions of voters suddenly unmoored from their century-long allegiance to the Democratic Party, Republicans adopted a darker, harsher version of conservative politics. They would no longer combine a pragmatic acceptance of the modern state with a cautious, realistic assessment of its limitations and delusions. The state engineered by progressive Republicans such as Theodore Roosevelt and New Deal Democrats . . . .  was an abomination to be destroyed.

Today’s Republican electorate — mostly white and male, and clustered in the small towns of the Midwest and, especially, the South — is the electorate you get when this is the message you preach for half a century. It consists of the ever diminishing numbers of people who continue to find it compelling. But however implausible it may seem to the rest of us, this dark vision of modernity as essentially a kind of heresy is the source of the Tea Party’s rage. It has an idea of what the world should look like, and it is shocked and horrified by the distance of that idea from the reality it detects all around it.

Central to that idea is the concept of dispossession. As I have argued before, the deeply Protestant roots of Southern revanchism posit a world in which rightful authority belongs to white heterosexual males who have, through fortitude and invention, wrested wealth from the detritus of a fallen world. The men of the Tea Party experience modern life as one continuous assault on this birthright.

The GOP base is indeed angry, but its anger is not some free-floating tantrum. It is an expression of a particular worldview, one that sees modern life as a deliberate, willful, well-designed effort to divest the virtuous white remnant of its privileges and to shower these on the unworthy and unholy.

This merely perpetuates the long, sorry story of the GOP’s relations with its fabled “base.” The Tea Party and its predecessors — the John Birchers and the White Citizens Councils, the Goldwaterites, the Reaganites, the Moral Majority, the “Contract With America” crowd and the Christian Coalition — have a history of bestowing their loyalty on politicians, and on a party, whose interest in them is more strategic than principled.  . . . Donald Trump, scourge of the elites, hammer of the modern world, is merely the latest avatar in a long line of failed gods.