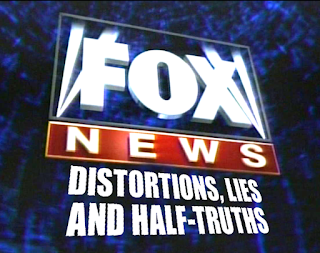 As so-called establishment Republicans continue to react with horror to Donald Trump's continued top spot in polls, they really need to look in the mirror id they want to see those responsible for Trump's rise.  They also need to look at Fox News - and many talk radio bloviators such as Rush Limbaugh - who they have allowed to make the embrace of ignorance and bigotry a virtue within the GOP base.  This GOP sponsored bubble or alternate universe is now catching up with the GOP and it may be difficult to push the party base back towards some semblance of grasping objective reality.  Trump is merely riding the crest of the wave that began with the welcoming of the Christofascists into the party and progressed with Fox News becoming one of the main GOP propaganda machines.  A piece in The Daily Beast looks at the creation of the atmosphere that Trump is now dominating.  Here are highlights:

[O]n Monday, two other post-debate polls came along showing that Trump is still going strong. So the results are interesting enough, and they track closely enough with other anecdotal evidence that’s made its way to my inbox, that it’s certainly worth asking: What if Trump is still clobbering the rest of the GOP field?

If he is, we’re at a very interesting politico-cultural moment: The moment when, to a sizeable portion of the GOP electorate, Fox News stopped being their warrior and instead became just another arm of the lamestream media. If that’s true, everything we’ve known and assumed about our political divide is now moot, and we’re flying totally blind. The Republican Party has unleashed furies it can no longer remotely control.

He [Trump] gained that point even though poll respondents said by a huge margin that he lost the debate (29 percent called him the loser; next closest was Rand Paul at 14 percent). Ted Cruz gained seven points, going from 6 to 13 percent. Ben Carson gained three points, moving from 8 to 11 percent. Marco Rubio stayed flat at 8 percent, and Jeb Bush and Scott Walker, the other “first-tier” candidates, finished in the cellar, losing three points each.

So add it up. The Tasmanian Devil candidate who’s obviously tapping into deep right-wing anti-establishment anger and the two other most extreme candidates combine for 47 percent. The two who in my view you can reasonably call quasi- or comparatively moderate, Kasich and Bush, combine to hit 9 percent.

We’re used to this kind of rhetoric when conservatives volley it in the direction of The New York Times and CNN. But what are we to make of it when the target is Fox?

Two things. First, if I’m right about this and other polls back all this up, this process is officially beyond anyone’s ability to predict. Ignore all “surely this will finally start Trump’s downfall” stories, and all positive Jeb! stories. And is Cruz soon-to-be first tier? . . . . And Carson! It’s not like he comes out of nowhere. They’ve been selling his first book by the truckful in Christian bookstores for years . . . And don’t ignore what an extremist he is: In his more recent book, which I actually read, he sincerely questioned whether citizens who pay no net income tax should have the right to vote—“Serious problems arise when a person who pays nothing has the right to vote and determine what other people are paying.”

The second thing we’re to make of this is that Fox and the Republican Party have created this new reality. When you spend years nodding and winking and yuk-yuking about the President’s birth certificate, how can you be surprised when the guy who has repeatedly demanded to see it turns out to be really popular with your base? You promote a politics that attacks women not merely for having abortions but for wanting to use contraception, and then you’re shocked when your hard-shell voting base turns out not to be overly offended by remarks like Trump’s?

Indeed Roger Ailes recognized all this when he decided to make nice with Trump on Monday.
The Republican Party and Fox permitted and encouraged Trumpian vitriol for years. All that talk over the years about birth certificates and Kenya and terrorist fist-jabs (remember that one?!) and the moocher class and the scary brown people and all the rest of it...all of it created a need for a Trump, and for other Trump-like candidates, to flourish. Now it threatens to overtake them. If they’re wondering who created Trumpism, I have someplace they can look. The mirror.

Posted by Michael-in-Norfolk at Wednesday, August 12, 2015