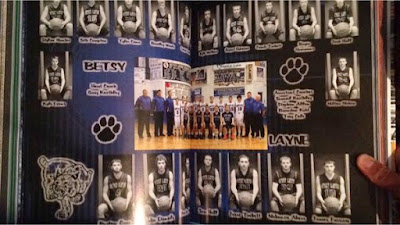 The sheer pettiness and mean spiritedness of the "godly folk" at times seems to know no bounds.  The gratuitous slights and insults that they direct towards LGBT individuals leaves one's mouth open in stunned disbelief.  Especially when the targets of such hate filled behavior is directed at the children of gays or LGBT Teens.  Betsy Layne High School in rural Kentucky provides us a recent glimpse at the ugliness of the "godly folk" and just how cruel they can be.  (In the spotlight of negative national media coverage, the high school claims it did not remove the gay player from the year book pages, but obviously, he was not magically removed himself).  Out Sports looks at the sad situation.

Betsy Layne High School in rural Kentucky this year had a two-page yearbook spread that featured all of the seniors on the boys basketball team. Except, one senior was left out of the tribute: Dalton Maldonado, the team's starting point guard who came out publicly as gay a couple months ago.

This is the latest slap in the face of Maldonado and the entire LGBT community by a high school administration that simply won't accept that one of its star athletes is gay and was harassed for his sexual orientation by an opposing basketball team last December. The school's yearbook has omitted its starting senior point guard from the senior boys basketball tribute page in the yearbook, a deeply insulting blow to an athlete who has contributed to his school.

Maldonado is, in fact, missing entirely from the page's call-out list of players (even including underclassmen)


Maldonado confirmed with Outsports that each of the other players on the bottom of the page was a senior, and that he is the only player omitted from the page. He commented on Facebook about his omission from the yearbook tribute page, and other actions the school has taken to marginalize him and his story:

Then I had a person [affiliated] with the school tell me what they had learned about the school attempting to cover up the whole story. I recently saw my senior yearbook, I flipped right to the sports basketball page only to find my senior basketball picture missing...which devastated me.

The school has repeatedly refused to answer questions or disputed what Maldonado has claimed, despite various eye witnesses confirming that Maldonado was targeted by anti-gay harassment.

Maldonado has shared stories of discrimination by the school for the last few months, so it shouldn't be a surprise that people at Betsy Layne High School may demonstrate deep-seated homophobia by excluding him from such an important honor for recent high school graduates.


It's pretty disgusting. Principal Cassandra Akers and her staff need to answer to questions about the exclusion of Maldonado from such an important piece of the high school experience of Maldonado and so many other high school athletes.

Thankfully, Maldonado has found support from LGBT people and supporters both in and outside his hometown. This fall he will attend the University of Louisville, which already has provided him with a support structure.

This bigotry is beyond sick.  As noted previously, when I hear someone bloviating about their Christian faith or over hear them making homophobic remarks, I simply write them off as horrible, nasty people.  Thankfully, others appear to be doing likewise.  It's no coincidence that 34% of Millennials have walked away from organized religion, which in the USA means that they have walked away from Christian denominations.  As for Betsy Layne High School, the administrators involved in this bigotry need to be summarily fired.
Posted by Michael-in-Norfolk at Thursday, August 13, 2015