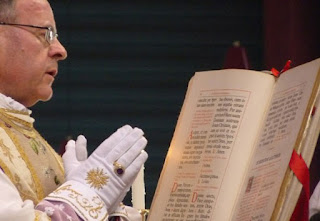 Get ready for shrieks and howls from American Christofascists as they point to a criminal complaint filed against a homophobic Swiss Roman Catholic Bishop who quoted the passage from Leviticus approving death as the penalty for gay sex and gay relationships.  I can already hear the claims that Christianity is being criminalized.  The gay rights group filing the complaint stated that  Bishop Vitus Huonder's statements amounted to incitement to violence against gays.  Just as disingenuously as a Republican presidential candidate claiming the his remarks were "misunderstood" Huonder issued a mealy mouthed "apology".   Newsweek has details.  Here are highlights:


A gay rights group has filed a criminal complaint against a Roman Catholic bishop after he quoted Bible verses calling for gay people to be killed and said the passage made clear what Church policy was on homosexuality.

Vitus Huonder, the Catholic Bishop of the city of Chur in eastern Switzerland, made the speech on 31 July, during a debate on marriage and family organised by the German Catholic Forum in Fulda, Germany.

His reading was followed by applause, before Huonder continued: "Both of these passages alone suffice to clarify unambiguously the church's position on homosexuality," according to a statement released by Pink Cross, an umbrella association for Swiss gay groups that is filing the complaint.

Pink Cross, supported by the Swiss Lesbian Organisation, argues that these comments amount to "inciting people to crime or violence," and handed a lawsuit to the public prosecutor of Canton Graubünden in eastern Switzerland on Monday. If found guilty, Huonder faces up to three years in prison.

Huonder has since issued an apology, saying his comments were misunderstood. "I am sorry if my 50 minute lecture in Fulda on 2 August 2015, which dealt with the biblical basis for marriage and family, was understood as diminishing homosexual people,"

Baumann says the group does not accept the bishop's apology. "There is no question in this case of what he was talking about—there was no misunderstanding. We don't need charity or mercy from the Church at all, we don't accept his apology."

It is not the first time Huonder's comments have landed him in trouble. Earlier this year he called for a priest in Switzerland to be sacked for blessing a lesbian couple, according to the UK-based online newspaper Pink News.