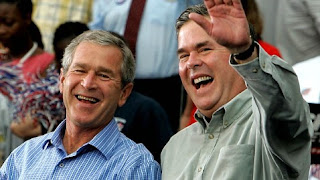 It takes real nerve - or perhaps stupidity - for Jeb Bush to try to criticize Hillary Clinton for the debacle in Iraq that was launched by his cretin brother George W. Bush, a/k/a the Chimperator on this blog, with no real plan for what would happen in the aftermath.  As readers will recall, Jebbie's idiot brother and Emperor Palpatine Cheney claimed that the Iraqi people would hail Americans as liberators, etc., etc.  None of that, of course happened.   Worse yet, many predicted the catastrophe that ultimately happened.  Despite all of this, Jebbie is now trying to blame Hillary for the rise of ISIS when in fact, it was the vacuum left by the removal of Saddam Hussein and the Sunni versus Shiite violence that actually gave rise to ISIS.  A piece in The Hill looks at a response directed to Jebbie's lies and nonsense.  Here are excerpts:

A senior policy aide for Hillary Clinton on Tuesday accused former Florida Gov. Jeb Bush of making a “bold attempt to rewrite history and reassign responsibility” on the Middle East.
Bush is expected to link Clinton to the growth of the Islamic State in Iraq and Syria (ISIS) in a speech later Tuesday.
“It’s curious that Gov. Bush is choosing Iraq as the place he wants to engage the foreign policy debate,” Jake Sullivan, Clinton’s senior policy adviser, told reporters on a conference call Tuesday.

“We’ve seen similar things from other Republican candidates — they cannot be allowed to escape responsibility for the real mistake here. They might hope we all forget but the American people remember.”
Sullivan accused the administration of George W. Bush, Jeb’s brother, of sending in too few troops, pushing out Sunnis that later became radicalized and adding to Iranian influence within the Iraqi government.
He added that Bush, not President Obama, set the withdrawal date for U.S. forces in Iraq.
“It’s simply wrong to assert that ISIS arose from the vacuum after American troops left,” he said.
“ISIS grew out of al Qaeda in Iraq, and where did AQI come from? It didn’t exist before the invasion. It emerged in no small part as a result of President Bush’s failed strategy, and it gained strength by signing up former Sunni military officers, officers from the very army the Bush administration disbanded.”

Like his idiot brother, Jebbie is a lying douche bag.  Do we really want the brother of arguably one of America's  worse presidents in the nation's history in the White House - especially when he refuses to renounce his brother's errors that wasted thousands of American lives and billions and billions of dollars?
Posted by Michael-in-Norfolk at Tuesday, August 11, 2015