Catholicism Comes to a Crossroads 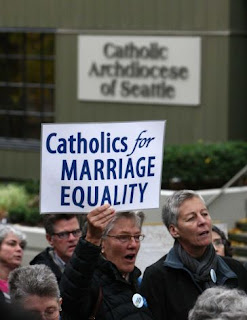 Many of the bitter old men in dresses in bishoprics across the western world refuse to admit that times and people have changed and that the Roman Catholic Church is at a likely crossroads that requires that the Church come out of 13th century beliefs or face growing irrelevance.  It is a reality that man of these less than decent men don't want to accept, the arch-reactionary bishop of Richmond, Virginia (who was installed in office by the less than saintly John Paul II, a protector of child rapists) being a prime example.  Not only is he viciously anti-gay, but he still treats divorced and remarried Catholics as lepers and bars them from positions in Catholic schools.  A piece in the Richmond Times Dispatch looks at the crossroads before the Church:

Today’s rapidly changing social views are demanding some uncharacteristically hasty action from the Vatican. The issues of same-sex marriage and the role of homosexuals in the Catholic Church threaten to create seismic divisions within the church or perhaps even leave it in a position of irrelevance.

Currently, 22 nations have legalized same-sex marriage. Many of those are traditionally Catholic-majority countries. In May, Ireland became the first nation to approve same-sex marriage by popular vote. The predominantly Roman Catholic nation stood tall in its opposition to the church’s position, with 62 percent voting in favor of same-sex marriage.

And what was the Vatican’s response? Cardinal Pietro Parolin, the Holy See’s secretary of state, called the vote “a defeat for humanity.” But the Archbishop of Dublin, Diarmuid Martin, had a different take. He bluntly admitted that it was time for the Church to do a reality check and ask itself if it has drifted away from young people.

A little more than one month later, the United States Supreme Court ruled that same-sex marriage was a constitutional right. That same day, June 26, the United States Conference of Catholic Bishops issued this statement: “Today is a tragic day for marriage and our nation. The Supreme Court has dealt a profound injustice to the American people by striking down in part the federal Defense of Marriage Act. The Court got it wrong. The federal government ought to respect the truth that marriage is the union of one man and one woman, even where states fail to do so.”

So, what happens to the Catholic Church? How can the Roman pontiff continue to exercise supreme and full power within the universal church if its flock in the Western nations deliberately flouts Catholic teachings? Does the church remain rigid and unbending even if many of the faithful leave for other churches more welcoming to gay and lesbian family members and friends? How does the Church remain relevant to young men and women who are far, far more accepting of same-sex marriage then their parents?

Catholics in Western nations represent only a small portion of the church and the religion is not growing in Ireland or anywhere else in Europe. (Nor is it growing particularly fast in the U.S.)

Thanks to social media, we have seen the grim images of violence toward gays and lesbians in nations where homosexuality is considered a crime. Compare those to the joyful celebrations that took place across Ireland and the U.S. when gay marriage was legalized.

I wonder: Which of these attitudes has His fingerprints all over it?