Trump is Driving Voters Away from GOP 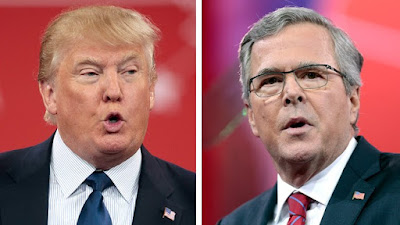 In the wake of Donald Trump's outrageous attacks on Megan Kelly, some in the GOP are belatedly voicing attacks on Trump.  The main point to remember is that while the Donald says outrageous and hatefully things, what he is saying is generally in line with GOP policies and continues to excite the GOP base because Trump isn't afraid to openly voice the hate and bigotry that are typical of today's GOP voter.  Thus, when Jeb "Jebbie" Bush accuses Trump of driving voters away from the GOP, Trumps big sin is openly saying what Jebbie and others prefer to state in dog whistler messages.  The Hill looks at Jebbie's disingenuous criticism of Trump.  Here are excerpts:

"What Donald Trump said is wrong,” he told listeners at the RedState Gathering in Atlanta. “Mr. Trump should apologize.”
“What he said does not win elections,” said Bush, who is also a White House hopeful next year. “Worse yet, it is not something that brings people together.”

Bush’s rebuke of Trump comes as the two men wrestle for the GOP’s presidential nomination next election cycle.
The former Florida governor is running in second behind the anti-establishment Trump in multiple national polls among potential voters.
Bush charged Saturday that Republicans will only reach the Oval Office next year by building a path that includes as many Americans as possible.

Bush on Saturday fiercely rejected the idea that Kelly unfairly targeted anyone from the GOP’s 2016 field during last week’s contest.
“We have candidates complaining that the questions were too tough,” he said. “That’s nothing.”
“Dealing with Putin is tough,” Bush quipped. “The big personalities on that stage matter nothing for people in poverty.”
“We need leaders to fix these big things,” he added. “We have had great presidents in the past who lifted our spirits with concrete solutions who did just that.”

The Donald shoots off his mouth.  Bush's past policies and the ones he supports now continue to attack women and harm the poor.  At least Trump says what his outrageous views are in fact.  Jebbie lies about his real agenda. Actions speak louder than words, and Jebbies past actions speak volumes.
Posted by Michael-in-Norfolk at Sunday, August 09, 2015