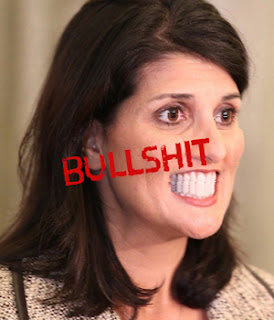 Republican politicians consistently prostitute themselves to the Christofascists in the party base by embracing every anti-gay measure that comes down the pike no matter how wrong it may be or how wastefully of state funds the eventual legal battles to preserve religious based discrimination may be.  South Carolina Governor Nikki Haley and Attorney General Alan Wilson are but two examples.  With South Carolina now under court order to pay the legal fees of the plaintiffs in that state's battle against gay marriage bans, the editorial board of the Herald has let loose on Haley and Wilson's waste of taxpayer money merely to pander to religious extremists.  Here are editorial highlights:

The decision by Gov. Nikki Haley and S.C. Attorney General Alan Wilson to launch a futile challenge to a federal appeals court ruling on gay marriage turned out to be costly for state taxpayers. And that came as no surprise to the many legal experts who had advised against the challenge.

[F]our of those states [in the 4th Circuit] announced they would stop defending challenges to the state’s gay-marriage ban. But Haley and Wilson took the opposite tack, pledging to fight on for South Carolina’s ban.

A variety of legal experts said at the time that continuing the fight would be a waste of the state’s time and money. They said the effort was doomed to fail, and they were right.

In October the U.S. Supreme Court allowed the 4th Circuit ruling to stand. Then, in late June, the Supreme Court issued its 5-4 ruling that made same-sex marriage legal nationwide.

And last week the bill came due for South Carolina. A federal judge ordered Wilson to pay $130,600 in legal fees for a couple who challenged the state’s gay-marriage ban. Judge Richard Gergel also awarded them the full $4,700 they sought in other court costs and fees.

This, of course, does not account for the time and money Wilson and his office spent on the challenge – resources that could have been used for something worthwhile.

Read more here: http://www.heraldonline.com/opinion/editorials/article30940170.html#storylink=cpy
What is more irksome is that the state’s case was hopeless from the start. Wilson was under no obligation to carry the challenge forward. He could have dropped it, as his North Carolina counterpart, Attorney General Roy Cooper, did.

By all appearances, the appeal was little more than an effort to appease opponents of gay marriage in the state. It was a political decision, not a practical one, and taxpayers had to pay for the charade.

While their no-surrender stance might have resonated with a segment of voters, it was an unnecessary and expensive gesture.  For politicians who claim to be careful stewards of the state’s resources, this was money down the drain.


Read more here: http://www.heraldonline.com/opinion/editorials/article30940170.html#storylink=cpy
Taxpayers ought to demand that Haley and Wilson personally reimburse the state for the moneys they needlessly squandered.