Cuckservative - Right Wingers Who Claim Their Country is Being Stolen 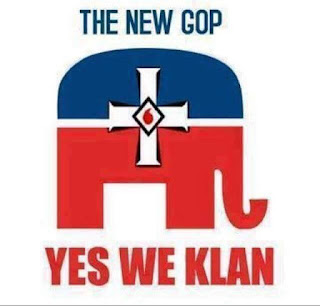 Haven't heard the term "Cuckservative" until now?  Candidly, neither did I since I don't frequent white nationalist circles.  But as a piece in Salon discusses, the term is becoming increasingly popular among the GOP base and it use to describe conservative who are allowing "their country" to be stolen from them by the usual targets of Christofascists and the white supremacy crowd but are too cowardly to do anything about it.  Sadly, it is part and parcel with the Republican Party's slide to insanity and open racism.  Here are excerpts from the piece:

In a recent article at Salon, Joan Walsh did an excellent job in navigating the political effluence that is the American right’s newborn obsession with “cuckservatives.”  There, she noted how:

“Cuckservative” started showing up in my Twitter mentions last week, after I suggested Donald Trump supporters might not be the brightest bulbs. As I clicked around, I came to a shocking conclusion: I’ve been uncharacteristically downplaying the amount of racism and misogyny powering the right today. The spread of the epithet “cuckservative” is a sign that the crudest psycho-sexual insecurity animates the far right.

“Cuckservative,” you see, is short for a cuckolded conservative. It’s not about a Republican whose wife is cheating on him, but one whose country is being taken away from him, and who’s too cowardly to do anything about it.

OK, that’s gross and sexist enough already, but there’s more. It apparently comes from a kind of pornography known as “cuck,” in which a white husband, either in shame or lust, watches his wife be taken by a black man. Lewis explains it this way: “A cuckservative is, therefore, a race traitor.”

White supremacists have reinforced the racial intent of the “cuckservative” narrative.   . . .  But, as Walsh explains, usage the word hasn’t been limited to white nationalist circles:

At present, “cuckservative” is just one more signal of how the contemporary Republican Party and movement conservatism have become a carnival-like human zoo fueled by the talk-radio echo chamber, one where extremism is now mainstream, and the politically adolescent and immature obsessions of “men’s rights” victimologists — with their “alpha males” and “cuckolding” anxieties — are considered reasonable and respectable points of view.

The convergence of white supremacy and conservatism in the modern Republican Party — spurred in part by a renaissance of toxic white masculinity — has produced what, in the moment, appears to be a series of never-ending climaxes and crescendos wherein new levels of absurdity and paranoia replace previous peaks once thought unattainable. The extreme has become the new normal for mainstream American conservatism.
[T]his camp of aggrieved and imperiled white men, drunk on toxic white masculinity, are terrified of their supposed status as “victims” in a more inclusive and cosmopolitan 21st century America. Whereas cuckolding has its foundations in eroticism, the term “cuckservative” has evolved from a related, but ultimately very different, psychosexual fixation: racialized castration anxieties.
White men saw themselves as the naturally dominant group in the United States from its founding to the present. The idea of white male privilege as “normal” and a given remains inexorably compelling — especially to the “angry” and aggrieved white men who are the base of the Republican Party in the post-civil rights era.
The Republican Party’s fetish for guns, its knee-jerk defense of white-on-black-and-brown police violence and abuse, and its theocratic Christian politics also have many wellsprings in the American South. The right’s desperate efforts to control women’s bodies and reproductive freedoms are likewise a legacy and reminder of how white men’s power has historically extended to their (supposed) ownership over women’s sexuality and health.

Thus, white male anxieties spoken to by those who authored and circulated the “cuckservative” meme are really just evoking a misdirected feeling by some white men that they have lost political power and potency — that they have been, so to speak, castrated.