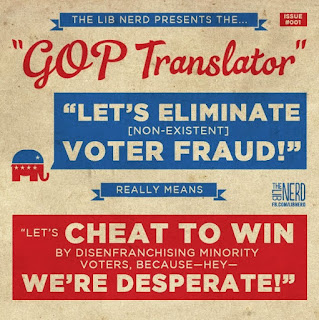 I have long bemoaned the Virginia GOP's effort to disenfranchise voters that they fear will not vote for its Kool-Aid drinking candidates: voter ID to stop non-existent voter fraud and gerrymandered districts have been the Virginia GOP's primary tools to toward trying to rig elections.  Now, national Democrats as well see the obscenity of Virginia's efforts to maintain the voting strength of the dwindling angry white voters.  As a result, as a piece in the Washington Post describes, Virginia is to be targeted as part of a wider effort to roll back GOP voter disenfranchisement efforts.  Here are article excerpts:

After Tracey Bell tried to register to vote in Virginia last year, she got a letter in the mail saying her citizenship was in doubt and she would have to pay $10 to prove it. Confused and annoyed, Bell ranted on Facebook.

It was the rare Facebook rant that actually led to government action. A friend put her in touch with the Virginia Democratic Party, which connected her to a lawyer who explained that she had forgotten to check a box confirming her citizenship. She fixed it — and a year later, Gov. Terry McAuliffe (D) is pushing to have the box requirement eliminated.

Both the lawyer and the governor are participating in a national Democratic effort to expand turnout that could make or break presidential election results in highly competitive states — and Virginia is a key target.

According to voting rights activists, 15 states with 162 electoral votes face new voting restrictions in 2016. Because of a 2013 Supreme Court decision overturning part of the 50-year-old Voting Rights Act, next year’s presidential election will be the first in which Southern states, including Virginia, will not be required to have election-law changes approved by federal authorities.

Democrats are hoping to bring in new voters across the country by breaking down barriers to voting through legal challenges, regulatory changes and grass-roots organizing. In Virginia, the only battleground presidential state that also has elections this year, Democrats are working closely with their national counterparts to expand the electorate — testing ways, for instance, to work around voter-identification laws, narrower voting windows and other restrictions generally backed by Republicans.

McAuliffe’s proposal, however, is not certain to succeed. The state GOP has objected forcefully against the change in the voter-registration form. And on Tuesday, the head of the Virginia Board of Elections postponed action on the plan, saying it needs to be reworked.

The Virginia Republican Party says that voter-ID requirements are common-sense safeguards against fraud.

State Democrats have formed a Voter Protection Council, working year-round with registrars, election officials and local parties to identify problems and publicize changes. They are identifying former felons and helping them get their rights restored, something McAuliffe has made easier.

The council is working on setting up a year-round hotline for voters to call in with questions. And Virginia Democrats plan to test a new model of the Democratic National Committee’s voter incident reporting system, a mobile application that logs problems at the polls. They want to improve volunteer coordination and sign up election officers earlier.

They are supporting lawsuits that would overturn the state’s voter-ID laws and redraw its congressional and legislative districts. At the same time, McAuliffe is leading a national effort to win governor’s seats in states that will draw new maps after 2020.

With a Republican-controlled legislature — and a Republican governor until 2014 — Virginia has voter-ID requirements that were made stricter in recent years. . . . In 2014, the then-Republican-controlled elections board ruled that the photo ID must be current or have expired within the past year. McAuliffe has since revamped the board with a Democratic majority.

“Virginia has been unique over the past few years because they have an election every year,” Pratt Wiley, national director of voter protection for the DNC. “There isn’t a state like Virginia . . . that is as appealing to be a testing ground and a proving ground.”

Posted by Michael-in-Norfolk at Wednesday, August 12, 2015