The Dangers of Turning Police Officers into Revenue Generators 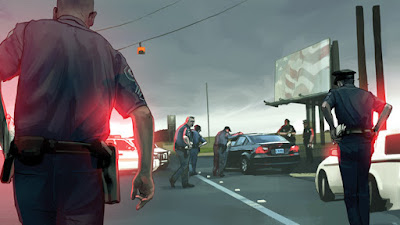 I have long believed that we have far too many police officers who due to temperament, racism, and general bigotry have absolutely no business wearing a badge and carrying a gun.  It is a recipe for disaster and the result is that we see more and more unarmed individuals - especially blacks and other minorities - abused, mistreated and all too often killed.  Lurking behind all of this is a factor that is often overlooked: as cities and municipalities have faced budget shortfalls, the police have been used to generate cash flow by increasingly stopping and ticketing people so that revenues from the fines and court fees help finance the municipality.  The result is that police are on the hunt for those they can stop and ticket in order to keep the desperately needed cash rolling in.  This allows politicians - typically Republicans - to boast that they have not raised taxes as court fines and fees help close deficits and fund the police and court systems. A piece in Mother Jones looks at the perverse and dangerous situation.  Here are highlights:

In April, several days after North Charleston, South Carolina, police officer Michael Slager stopped Walter Scott for a busted taillight and then fatally shot him, the usual cable-news transmogrification of victim into superpredator ran into problems. The dash cam showed Scott being pulled over while traveling at a nerdy rate of speed, using his left turn signal to pull into a parking lot and having an amiable conversation with Slager until he realized he'd probably get popped for nonpayment of child support. At which point he bolted out of the car and hobbled off. Slager then shot him. Why didn't the cop just jog up and grab him? Calling what the obese 50-year-old Scott was doing "running" really stretches the bounds of literary license.

But maybe the question to ask is: Why did Scott run? The answer came when the New York Times revealed Scott to be a man of modest means trapped in an exhausting hamster wheel: He would get a low-paying job, make some child support payments, fall behind on them, get fined, miss a payment, get jailed for a few weeks, lose that job due to absence, and then start over at a lower-paying job. From all apparent evidence, he was a decent schlub trying to make things work in a system engineered to make his life miserable and recast his best efforts as criminal behavior.

Slager had a record for gratuitously using his Taser. Timothy Leohmann, who leapt from his car and instantly killed 12-year-old Tamir Rice, had been deemed "weepy" and unable to "emotionally function" by a supervisor at his previous PD job, who added: "I do not believe time, nor training, will be able to change or correct these deficiencies." Ferguson's Darren Wilson was also fired from his previous job—actually, the entire police force of Jennings, Missouri, was disbanded for being awful.

When you ask why such "bad" cops are nevertheless armed and allowed to patrol the streets, one begins to see that lurking beneath this violence is a fiscal menace: police departments forced to assist city officials in raising revenue, in many cases funding their own salaries—redirecting the very concept of keeping the peace into underwriting the budget.

We saw a glimpse of this when the Justice Department released its report on Ferguson in March.  . . . . Even as he was jailing black ladies for parking tickets, Brockmeyer was allegedly erasing citations for white Ferguson residents who happened to be his friends. After the report's publication, he resigned so that Ferguson could "begin its healing process."

But consider: In 2010, this collaboration between the Ferguson police and the courts generated $1.4 million in income for the city. This year, they will more than double that amount—$3.1 million—providing nearly a quarter of the city's $13 million budget, almost all of it extracted from its poorest African American citizens.

Evidence also suggests that this new form of raising revenue—policiteering?—goes far beyond Ferguson. . . .  "Essentially, these small towns in urban areas have municipal infrastructure that can't be supported by the tax base, and so they ticket everything in sight to keep the town functioning," said William Maurer, a lawyer with the Institute for Justice who has been studying the sudden rise in "nontraffic-related fines."

Take the St. Louis suburb of Pagedale, where, among other Norman Rockwell-worthy features deemed illegal, "you can't have a hedge more than three feet high," Maurer says. "You can't have a basketball hoop or a wading pool in front of a house. You can't have a dish antenna on the front of your house. You can't walk on the roadway if there is a sidewalk, and if there is not a sidewalk, they must walk on the left side of the roadway. They must walk on the right of the crosswalk. They can't conduct a barbecue in the front yard and can't have an alcoholic beverage within 150 feet of a barbecue. Kids cannot play in the street. They also have restrictions against pants being worn below the waist in public. Cars must be within 500 feet of a lamp or a source of illumination during nighttime hours. Blinds must be neatly hung in respectable appearance, properly maintained, and in a state of good repair."

A different strategy in San Diego simply tacks on various fees to an existing fine. A 2012 Union Tribune investigation revealed that while speeding is a simple $35 fine, other government agencies can tack on as many as 10 other surcharges, including: a state penalty assessment, $40; county penalty assessment, $36; court construction, $20; state surcharge, $8; DNA identification, $16; criminal conviction fee, $35; court operations, $40; emergency medical air transportation penalty, $4; and night court, $1. When it's all said and done, that $35 ticket comes to $235.

There is still no comprehensive study to determine just how many cities pay their bills by indenturing the poor, but it is probably no coincidence that when you examine the recent rash of police killings, you find that the offenses they were initially stopped for were preposterously minor.

"Once the system is primed for maximizing revenue—starting with fines and fine enforcement," Holder said apropos Ferguson, "the city relies on the police force to serve, essentially, as a collection agency for the municipal court rather than a law enforcement entity."

In Alabama, a circuit court judge, Hub Harrington, wrote a blistering opinion three years ago asserting that the Shelby County Jail had become a kind of "debtors' prison" and that the court system had devolved into a "judicially sanctioned extortion racket."
When the poor come to understand that they are likely to be detained and fined for comically absurd crimes, it can't be a surprise to the police that their officers are viewed with increasing distrust. In this environment, running away from a cop is not an act of suspicion; it's common sense.

[W]hen budgetary whims replace peacekeeping as the central motivation of law enforcement, who is more likely to write up more tickets, the good cop or the crummy one? When the mission of the entire department shifts from "protect and serve" to "punish and profit," then just what constitutes good police?