Dozens of Retired Generals and Admirals Back Iran Nuclear Deal 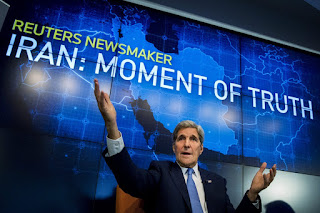 While the Republican presidential candidates - few if any of whom served in the military - are condemning the Iran nuclear deal, dozens of retired generals and admirals are supporting the agreement negotiated by the Obama administration.  They, unlike the GOP base and the architects of the failed Iraq War, don't revel in murdering Muslims and throwing away the lives of American military members.  The Washington Post looks at the letter submitted by the retired generals and admirals (read the letter here).  Here are article highlights:

Three dozen retired generals and admirals released an open letter Tuesday supporting the Iran nuclear deal and urging Congress to do the same.

Calling the agreement “the most effective means currently available to prevent Iran from obtaining nuclear weapons,” the letter said that gaining international support for military action against Iran, should that ever become necessary, “would only be possible if we have first given the diplomatic path a chance.”

The release came as Secretary of State John F. Kerry said U.S. allies were “going to look at us and laugh” if the United States were to abandon the deal and then ask them to back a more aggressive posture against Iran.

Not only would U.S. global credibility be undermined, Kerry said, but the dollar’s position as the world’s reserve currency would be threatened.

[T]here’s a huge antipathy out there” to U.S. leadership. Pointing to efforts by Russia and China to join forces with rising, non-aligned powers, he said that “there’s a big bloc out there, folks, that isn’t just sitting around waiting for the United States to tell them what to do.”

[H]e [John Kerry] painted a harsh picture of the results of U.S. rejection. Allies would refuse to retain sanctions or impose new ones, or join in possible military action, he said.

The letter from the retired military officers followed the release this past weekend of a letter to Obama by 29 of the nation’s leading scientists, who called the Iran deal “technically sound, stringent and innovative,” and said it would “provide the necessary assurance in the coming decade and more that Iran is not developing nuclear weapons.”

Signers of the military letter include retired general and flag officers from every branch of service. They include four-star Marine Gens. James Cartwright, former vice chairman of the Joint Chiefs of Staff, and Joseph P. Hoar, former head of the U.S. Central Command; and Gens. Merrill McPeak and Lloyd W. Newton of the Air Force.

“There is no better option to prevent an Iranian nuclear weapon,” the letter said. “Military action would be less effective than the deal, assuming it is fully implemented. If the Iranians cheat, our advanced technology, intelligence and the inspections will reveal it, and U.S. military options remain on the table.”

“And if the deal is rejected by America,” it said, “the Iranians could have a nuclear weapon within a year. The choice is that stark.”