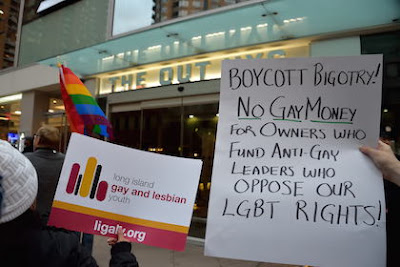 Seemingly, Ian Reisner and Mati Weiderpass learned nothing from the debacle surrounding their fundraiser for anti-gay extremist, Ted Cruz.  Now the two self-anointed "A-listers"  are back raising money for an anti-gay politician who opposes civil rights for the rest of non-A-lister gays.  Reisner and Weiderpass apparently believe that their wealth protects them from the consequences of policies pushed by anti-gay Republicans such as Republican Ron Johnson of Wisconsin, the latest enemy of LGBT individuals to benefit from their fundraising.  In their self-centered world, the rest of us gays can go f*ck ourselves.  Gay City News looks at this latest slap in the face to the LGBT community by these douche bags.  Here are highlights:

A host and guests at a fundraiser held by embattled real estate developers Ian Reisner and Mati Weiderpass at their Central Park South penthouse donated at least $10,600 to Republican Ron Johnson, a right-wing US senator from Wisconsin who faces a 2016 challenge from Democrat Russ Feingold. Reisner, who is gay, gave Johnson $2,700, the maximum allowed under federal election law.

Other donors who maxed out at the Johnson event were Ken Mehlman, a longtime Republican Party operative who is also gay, and Sam Domb, a longtime Reisner business associate. Domb owns the property that houses the Out NYC, Reisner’s Midtown hotel.

The hosts and the guests were supporting Johnson because of the senator’s support for Israel and his views on the Middle East, according to the press release, which described those in attendance as “a bipartisan group of Jewish business leaders –– both committed Republicans and several traditionally aligned with Democrats.”

The Out NYC and Reisner’s properties in the Pines on Fire Island came under boycott after the New York Times reported that he held an April 20 fundraiser for Republican Ted Cruz, a Texas senator and candidate for the Republican nomination for president.  . . . The community objected to Reisner and Weiderpass taking money from their LGBT customers and giving it to anti-LGBT right-wingers.

Cruz and Johnson are associated with the Tea Party movement and are anti-LGBT. Both oppose same-sex marriage and both voted against the Employment Non-Discrimination Act (ENDA) in 2013.

Reisner and Weiderpass did not respond to requests for comment.


Let the boycotts continue!!
Posted by Michael-in-Norfolk at Saturday, August 15, 2015