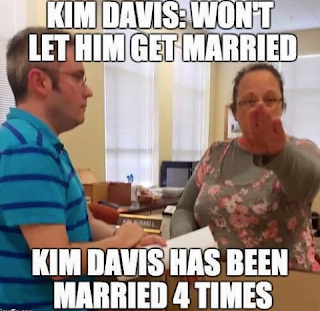 One pattern that we see over and over again is that of Christofascists viewing themselves as above the law.  In their warped mindset, clinging to myths and legends based on the writings of ignorant Bronze Age herders is more important than complying with the civil laws of the United States of America.  One of the current poster children for this phenomenon is Kim Davis, the Rowan County, Kentucky, clerk of Court, who believes she can ignore the duties of her position and give the figurative middle finger to a federal court because of her "deeply held religious beliefs" that rely on 2000 year old myths.  As The New Civil Rights Movement reports,  Davis has been ordered by the federal district court to issue marriage licenses to all applicants, gay or straight. She has decided to basically tell the court to go f*ck itself.  If there was ever a case where someone needs to be lead off to jail for contempt of court, it is Ms. Davis.  The irony, of course is that while she claims to be constrained by her religious beliefs,  she hasn't respected the "sanctity of marriage" that she now pretends to be protecting.  Here are story highlights:

U.S. District Judge David Bunning granted a preliminary injunction today against Kim Davis, the Rowan County, Kentucky, clerk who stopped issuing all marriage licenses after the Supreme Court made marriage equality the law of the land. Ms. Davis, who claims a religious objection to issuing marriage licenses to same-sex couples, was sued by the ACLU on behalf of both gay and straight couples who were inconvenienced by her stance. Ms. Davis then sued the Governor who told all the state's rebelling clerks to get back to work, for violating her religious rights.

Judge Bunning found Ms. Davis has no legal right to object on religious grounds and ordered her to begin to issue licenses immediately, writing:

"Davis is bound by her duties as a public servant to obey the law. She is even free to believe that marriage is a union between one man and one woman, as many Americans do. However, her religious convictions cannot excuse her from performing the duties that she took an oath to perform as Rowan County clerk," Bunning wrote."

Davis needs to be placed in jail for contempt of court plain and simple. But the "rest of the story" is that she has been encouraged to defy the federal court's order by Mat Staver and the other extremists at Liberty Counsel.  Joe My God has details on this part of the story:

On Thursday, deputy clerk Nathan Davis, Kim Davis’ son, said the office was advised by attorneys with the Christian law firm Liberty Counsel to continue refusing same-sex couples as it appeals the order that was filed Wednesday. They told David Moore and his partner David Ermold, who showed up as soon as the doors opened, that they were not issuing marriage licenses. Davis’ attorneys at Liberty Counsel were not available for comment Thursday. They told WKYT they were in a prayer meeting.

My question is a simple one: when the Hell is Staver's law license going to be revoked.  If anyone else engaged in such conduct, the state bar would more against them so fast their head would be spinning. Are we yet again witnessing undue deference and special rights being afforded to those who hide behind "religious belief" to flout the law. I say, disbar Staver.
Posted by Michael-in-Norfolk at Thursday, August 13, 2015