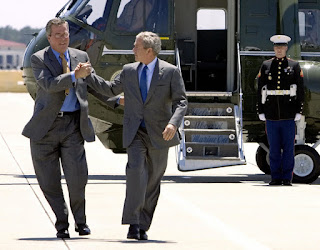 For almost 15 years now, America has been plagued by a never ending disaster in the Middle East that was launched for the most part by the lies and deceit of George W. Bush and Emperor Palpatine Cheney.   In short, they and their advisers took America to war in Iraq based on deliberate lies and a fantasy world view of how their fool's errand would play out.  Thousands of Americans - and hundreds of thousands of Iraqis - paid with literally their lives and/or ruined lives and America was partially bankrupted.  Enter Jeb "Jebbie" Bush and his ego driven desire to be president.  Terrifyingly, Jebbie's view of the Middle East and his would be policies would likely be a carbon copy of his idiot brother's disastrous policies.  Jebbie and the recycled advisers he has assembled from his brother's failed regime have learned nothing from the last 15 years.  This alone disqualifies the man from ever occupying the White House.  The Washington Post looks at the concern of even Republicans who revel in killing Muslims have over Jebbie's would be policies.  Here are excerpts:

Under a blazing sun, Bush expressed irritation with what he called “the parlor game” of focusing on Wolfowitz and other past Bush administration advisers who have resurfaced for this Bush campaign.

This was supposed to be the week when Bush would finally lay out his own thoughts on how to combat the Islamic State terror group and put Hillary Rodham Clinton on the defensive — and wrest himself from his family legacy in the process. But over several days, it has become evident that his ideas on the subject are remarkably similar to George W. Bush’s ideas and that he firmly believes that Democrats — not his brother — deserve the blame for the unrest in Iraq and neighboring Syria.

His new struggles with the issue also come as he is fading in polls and being drowned out by the angry outsiders dominating the race.

According to Bush this week, the removal of Saddam Hussein from power “turned out to be a pretty good deal.” The 2007 troop surge was “an extraordinarily effective” strategy. By the time his brother left office, he said, the “mission was accomplished” in Iraq because security had been restored.

Bush also said he won’t rule out waterboarding in the interrogation of terrorism suspects, although he added, “I do think in general that torture is not appropriate.”

He said it might be necessary to deploy more U.S. forces to both Iraq and Syria — and that troops already on the ground should be embedded more closely with local forces.

Democrats are eager to exploit Bush’s remarks this week to remind voters of his family ties. During a town hall in Dubuque, Iowa, on Friday afternoon, Clinton took aim at Bush’s criticism of her, noting that his brother signed an agreement as president to withdraw combat troops from the country by 2011.   I do think that it’s a little bit surprising to hear Jeb Bush talk about this,” she said. “He expects the American people to have a collective case of amnesia.”

Most Americans still believe the Iraq war was a mistake and are opposed to new military engagement — making Jeb Bush’s approach to national security risky.

Carl Owens, a hog farmer, stood off to the side taking in the scene.  “I don’t know if he’s like his brother and dad or not,” said Owens, 59. “I wasn’t too happy with them. Mr. Bush, the last president, look at the mess he got the United States into over there where we shouldn’t have been. Kind of like the Vietnam War. We shouldn’t have been there.”

Mr. Owens, the hog farmer has clearer vision than Jebbie.  And if anyone is playing "parlor games" it is Jebbie and his delusional advisers - except their games involve throwing away more American lives.

Posted by Michael-in-Norfolk at Saturday, August 15, 2015