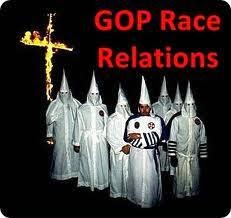 The lies and fast tap dancing of the Republicans continues as the Steve Scalise white supremacist scandal refuses to quietly die.  Having watched the transformation of the GOP from its days of social issues moderation and fiscal responsibility to today's party of religious extremists, voodoo economics and open racism, it is mind boggling how the Republicans and their talking heads try to paper over the fact that white supremacists, like the Christofascists, were actively recruited by the GOP establishment - starting with Richard Nixon's "Southern Strategy" - and allowed to infiltrate the party.  Now, when caught with the consequences of their own actions/policies, the only defense the GOP can muster is to try to say some Democrats were/are racists too.  A piece in The Daily Beast looks at the phenomenon.  Here are highlights:

In much the way one used to savor the sight of some lying schmuck be game-set-match cornered by Mike Wallace on 60 Minutes, I love watching conservatives try to explain away race scandals. Like the be-Wallaced lying schmuck, they know deep down they’ve had it. But quite unlike the schmuck, and this is the fun part, they never run up the white flag; indeed quite the opposite. They go on the attack, and it’s just a comical and pathetic thing to see.

Before we get to all that, permit me a brief reflection on this matter of Steve Scalise. Let’s allow him the error in judgment, or whatever tripe it is he’s peddling, of speaking to a David Duke-related white supremacist group in 2002. It’s hard to believe, but let’s go ahead and be generous about it.

I think we should find it a little harder, though, to be generous about his vote as a state legislator in 2004 against a Martin Luther King Jr. holiday in the state of Louisiana. . . . No error in judgment explains that. He was part of an extreme, racialized white faction in the Louisiana state house that was clearly dead-set against honoring King.

So it’s hardly shocking that Scalise spoke to the group. Indeed it would have been more shocking if he hadn’t. This is a state, after all, where Duke, in his statewide race for governor in 1991, received a majority of the white vote. In fact, a large majority, of 55 percent, meaning that even though Edwin Edwards walloped Duke by 23 points, a near-landslide percentage of white Louisianans voted to make an avowed white supremacist their governor. Yeah, it was a long time ago. But how different would things have been 11 years later, when Scalise attended the Duke event? By attending, he wasn’t doing anything that would have been seen as controversial by most of his white constituents; indeed most of them would have endorsed it.

[T]he fun starts when conservatives stop playing defense and go on offense. Here are the three main tropes, which apply not only in this situation but every time we’re met with one of these revelations.

1. But Al Sharpton is the real racist!

2. But hey, we elected Tim Scott.
Right. You did (he’s the African-American conservative Senator from South Carolina). And J.C. Watts back in the 1990s. And there was Allen West. And now’s there’s Mia Love of Utah and Will Hurd of Texas. Bravo. That’s five. Congratulations! Meanwhile, white liberals have helped elect dozens of blacks to high office—mayors, members of Congress, a few senators and governors, and now a president.  This is supposed to “prove” that conservatives aren’t racist . . .

3. B-b-but Robert Byrd!
Ah, my favorite of them all. Amazing how people can still haul this one out with a straight face. Yes, Byrd—dead four-and-a-half years now—was a Kleagle in the Ku Klux Klan. And his last known affiliation with the Klan was almost 70 years ago, in 1946. And yes, he voted against the Civil Rights Act in 1964. But as everyone knows, he went on to say—not once but many times—that that was the greatest error of his career by far.

I suspect that somewhere down there in the Freudian precincts of their minds, the Byrd-invokers from Limbaugh on down know this, and it’s what they hate about Byrd most of all: The very sincerity of his repentance makes him a capitulator to the liberal elite and a traitor to his race. But they can’t say that in polite company, so they keep whipping a horse that’s been dead for at least 40 years.

And they’ll probably whip it for another 40, unless demographics overwhelm them sometime between now and then, but they’ll resist that as long as they can too. There’ll be more Steve Scalises, and every time, the right-wing orchestra will strike up the same weary tune.