The New Science that Has Creationists and the Christofascists Terrified 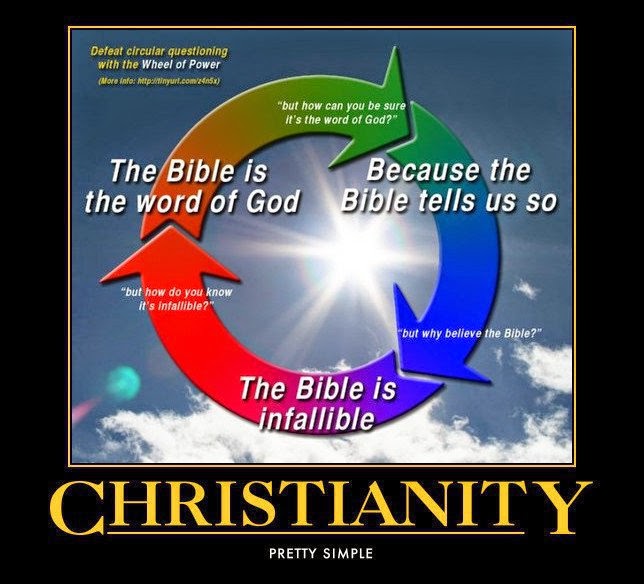 Nothing is more terrifying to the Christofascists and their creationist allies than modern science which is steadily disproving many of the pillars of the Christian story line, including the fact that Adam and Eve never existed.   For these people, having to think for themselves and not being able to smugly look down on others who aren't "saved" is a horrifying prospect.  But as science advances, their beliefs in myths and fairy tales is increasingly threatened - something that, in my view, is a good thing for humanity.  A piece in Salon looks at how new science is putting more and more pressure on Christofascist beliefs.  Here are excerpts:

The Christian right’s obsessive hatred of Darwin is a wonder to behold, but it could someday be rivaled by the hatred of someone you’ve probably never even heard of. Darwin earned their hatred because he explained the evolution of life in a way that doesn’t require the hand of God. Darwin didn’t exclude God, of course, though many creationists seem incapable of grasping this point. But he didn’t require God, either, and that was enough to drive some people mad.

Darwin also didn’t have anything to say about how life got started in the first place — which still leaves a mighty big role for God to play, for those who are so inclined. But that could be about to change, and things could get a whole lot worse for creationists because of Jeremy England, a young MIT professor who’s proposed a theory, based in thermodynamics, showing that the emergence of life was not accidental, but necessary. “[U]nder certain conditions, matter inexorably acquires the key physical attribute associated with life,” he was quoted as saying in an article in Quanta magazine early in 2014, that’s since been republished by Scientific American and, more recently, by Business Insider. In essence, he’s saying, life itself evolved out of simpler non-living systems.

The notion of an evolutionary process broader than life itself is not entirely new. Indeed, there’s evidence, recounted by Eric Havelock in “The Liberal Temper in Greek Politics,” that it was held by the pre-Socratic natural philosophers, who also first gave us the concept of the atom, among many other things. But unlike them or other earlier precursors, England has a specific, unifying, testable evolutionary mechanism in mind.

It doesn’t mean we should expect life everywhere in the universe — lack of a decent atmosphere or being too far from the sun still makes most of our solar system inhospitable for life with or without England’s perspective. But it does mean that “under certain conditions” where life is possible — as it is here on Earth, obviously — it is also quite probable, if not, ultimately, inevitable. Indeed, life on Earth could well have developed multiple times independently of each other, or all at once, or both. The first truly living organism could have had hundreds, perhaps thousands of siblings, all born not from a single physical parent, but from a physical system, literally pregnant with the possibility of producing life. And similar multiple births of life could have happened repeatedly at different points in time.

Giordano Bruno, who was burnt at the stake for heresy in 1600, was perhaps the first to take Copernicanism to its logical extension, speculating that stars were other suns, circled by other worlds, populated by beings like ourselves. His extreme minority view in his own time now looks better than ever, thanks to England.

If England’s theory works out, it will obviously be an epochal scientific advance. But on a lighter note, it will also be a fitting rebuke to pseudo-scientific creationists, who have long mistakenly claimed that thermodynamics disproves evolution (here, for example), the exact opposite of what England’s work is designed to show — that thermodynamics drives evolution, starting even before life itself first appears, with a physics-based logic that applies equally to living and non-living matter.

England appears to have assembled a collection of analytical tools, along with a sophisticated multidisciplinary theoretical approach, which promises to do much more than simply propound a theory, but to generate a whole new research agenda giving detailed meaning to that theoretical conjecture. And that research agenda is already starting to produce results. (See his research group home page for more.) It’s the development of this sort of detailed body of specific mutually interrelated results that will distinguish England’s articulation of his theory from other earlier formulations that have not yet been translated into successful theory-testing research agendas.

Creationists often cast themselves as humble servants of God, and paint scientists as arrogant, know-it-all rebels against him. But, unsurprisingly, they’ve got it all backwards, once again. England’s work reminds us that it’s scientists’ willingness to admit our own ignorance and confront it head on — rather than papering over it — that unlocks the great storehouse of wonders we live in and gives us our most challenging, satisfying quests.