The Bible: Myth or Revisionist Propaganda? 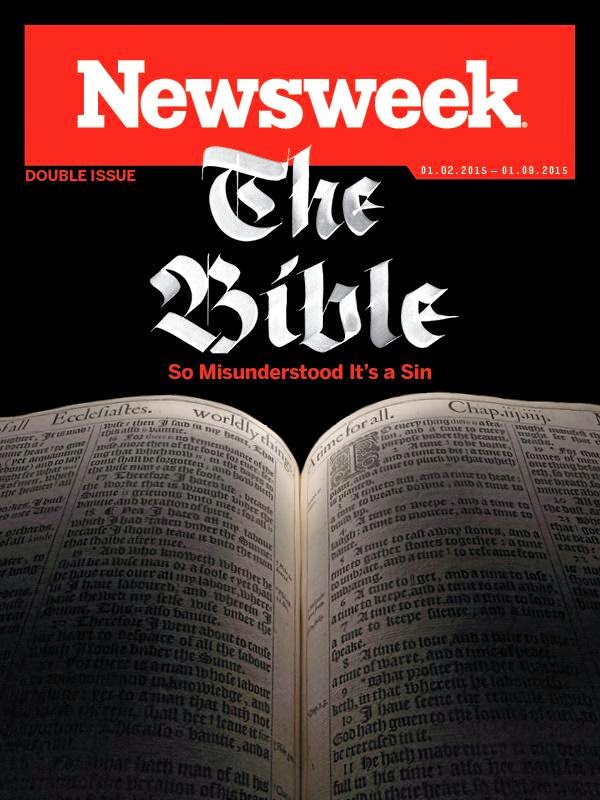 I'm a frequent critic of Christofascists, biblical literalists and the politicians who prostitute themselves to them.  Some readers - and some friends - say I am too harsh, especially when I comment on articles that question, gasp, the horror, whether or not Christ even existed.  A piece in Newsweek has prompted outraged among the "godly folk" by taking a good look at the truth about the Bible and its sketchy origins.  While they mutter about sacrilege, attacks on Christians, the real unspoken issue may be that these folks have possible lived their lives based on myth and/or revisionist lies.  The take away, for me, is that no serious minded person should take the supposed claims of the Bible very seriously and that those who do deserve little of no deference. Here are some highlights from the piece which deserves a full read:

They wave their Bibles at passersby, screaming their condemnations of homosexuals. They fall on their knees, worshipping at the base of granite monuments to the Ten Commandments while demanding prayer in school. They appeal to God to save America from their political opponents, mostly Democrats. They gather in football stadiums by the thousands to pray for the country’s salvation.

They are God’s frauds, cafeteria Christians who pick and choose which Bible verses they heed with less care than they exercise in selecting side orders for lunch. They are joined by religious rationalizers—fundamentalists who, unable to find Scripture supporting their biases and beliefs, twist phrases and modify translations to prove they are honoring the Bible’s words.

This is no longer a matter of personal or private faith. With politicians, social leaders and even some clergy invoking a book they seem to have never read and whose phrases they don’t understand, America is being besieged by Biblical illiteracy.

The Bible is not the book many American fundamentalists and political opportunists think it is, or more precisely, what they want it to be. Their lack of knowledge about the Bible is well established.

The Barna Group, a Christian polling firm, found in 2012 that evangelicals accepted the attitudes and beliefs of the Pharisees—religious leaders depicted throughout the New Testament as opposing Christ and his message—more than they accepted the teachings of Jesus.

Newsweek’s exploration here of the Bible’s history and meaning is not intended to advance a particular theology or debate the existence of God. Rather, it is designed to shine a light on a book that has been abused by people who claim to revere it but don’t read it, in the process creating misery for others.   When the illiteracy of self-proclaimed Biblical literalists leads parents to banish children from their homes, when it sets neighbor against neighbor, when it engenders hate and condemnation, when it impedes science and undermines intellectual advancement, the topic has become too important for Americans to ignore, whether they are deeply devout or tepidly faithful, believers or atheists.

This examination—based in large part on the works of scores of theologians and scholars, some of which dates back centuries—is a review of the Bible’s history and a recounting of its words.

[I]n the past 100 years or so, tens of thousands of manuscripts of the New Testament have been discovered, dating back centuries. And what biblical scholars now know is that later versions of the books differ significantly from earlier ones—in fact, even copies from the same time periods differ from each other.

Scribes added whole sections of the New Testament, and removed words and sentences that contradicted emerging orthodox beliefs.  Take one of the most famous tales from the New Testament, which starts in John 7:53. A group of Pharisees and others bring a woman caught committing adultery to Jesus. Under Mosaic Law—the laws of Moses handed down in the Old Testament—she must be stoned to death. The Pharisees ask Jesus whether the woman should be released or killed . . . . .

Unfortunately, John didn’t write it. Scribes made it up sometime in the Middle Ages. It does not appear in any of the three other Gospels or in any of the early Greek versions of John. Even if the Gospel of John is an infallible telling of the history of Jesus’s ministry, the event simply never happened.


[T]he earliest versions of Mark stop at 16:8.  . . . . .  The 12 verses that follow in modern Bibles—Jesus appearing to Mary Magdalene and the Disciples and then ascending to Heaven—are not there. A significant moment that would be hard to forget, one would think.

The same is true for other critical portions of the Bible, such as 1 John 5:7 (“For there are three that bear record in heaven, the Father, the Word, and the Holy Ghost: and these three are one”); Luke 22:20 (“Likewise also the cup after supper, saying, This cup is the new testament in my blood, which is shed for you”); and Luke 24:51 (“And it came to pass, while he blessed them, he was parted from them, and carried up into heaven”).

Then comes the problem of accurate translation. Many words in New Testament Greek don’t have clear English equivalents. Sentence structure, idioms, stylistic differences—all of these are challenges when converting versions of the New Testament books into English. And this can’t be solved with a Berlitz course: Koiné is ancient Greek and not spoken anymore. This is why English translations differ, with many having been revised to reflect the views and guesses of the modern translators. . . . . In other words, religious convictions determined translation choices.

In other words, with a little translational trickery, a fundamental tenet of Christianity—that Jesus is God—was reinforced in the Bible, even in places where it directly contradicts the rest of the verse.


[W]here does the clear declaration of God and Jesus as part of a triumvirate appear in the Greek manuscripts?  Nowhere. And in that deception lies a story of mass killings.

Christians are believed to have massacred more followers of Jesus than any other group or nation.  Those who believed in the Trinity butchered Christians who didn’t. Groups who believed Jesus was two entities—God and man—killed those who thought Jesus was merely flesh and blood.  . . . .  Indeed, for hundreds of years after the death of Jesus, groups adopted radically conflicting writings about the details of his life and the meaning of his ministry, and murdered those who disagreed.

At Nicaea, rules were adopted regarding the proper positions for prayer on Sundays—standing, not kneeling; nothing was said of the Jewish Sabbath or Saturday. Many theologians and Christian historians believe that it was at this moment, to satisfy Constantine and his commitment to his empire’s many sun worshippers, that the Holy Sabbath was moved by one day, contradicting the clear words of what ultimately became the Bible.  . . . . .  Constantine sided with those who believed Jesus was both God and man, so a statement of belief, called the Nicene Creed, was composed to proclaim that. Those who refused to sign the statement were banished. Others were slaughtered. After they had returned home and were far from Rome, some who signed the document later sent letters to Constantine saying they had only done so out of fear for their lives.

About 50 years later, in A.D. 381, the Romans held another meeting, this time in Constantinople. There, a new agreement was reached—Jesus wasn’t two, he was now three—Father, Son and Holy Ghost. The Nicene Creed was rewritten, and those who refused to sign the statement were banished, and another wholesale slaughter began, this time of those who rejected the Trinity, a concept that is nowhere in the original Greek manuscripts and is often contradicted by it.

None of this is meant to demean the Bible, but all of it is fact. Christians angered by these facts should be angry with the Bible, not the messenger.


The declaration in 1 Timothy—as recounted in the Living Bible, the New American Standard Bible, the New International Version Bible and others—could not be more clear: Those who “practice homosexuality” will not inherit the Kingdom of God. But the translation there is odd, in part because the word homosexual didn’t even exist until more than 1,800 years after when 1 Timothy was supposed to have been written. So how did it get into the New Testament? Simple: The editors of these modern Bibles just made it up. Like so many translators and scribes before them, they had a religious conviction, something they wanted to say that wasn’t stated clearly enough in the original for their tastes. And so they manipulated sentences to reinforce their convictions.

The original Bible verse in Koiné used ἀρσενοκοῖται for what has been translated as “homosexual.” For the Latin Bible, it was as masculorum concubitores. The King James Version translated that as “them that defile themselves with mankind.” Perhaps that means men who engage in sex with other men, perhaps not.  The next thing to check here is whether 1 Timothy was based on a forgery. And the answer to that is a resounding yes.

There is more which deserves a full read.  Again, the take away?   Those who believe in the Bible as inerrant or that it is the "word of God" are engaged in either deliberate self-delusion, suffer from shocking ignorance, or merely want to believe in fairy tales and myths.  What's even more sad is that so many lives have been damaged or lost based on supposed belief in a book that isn't much more that frequently manipulated fiction.  Belief in the Bible and its supposed strictures have no place in public policy or the civil laws.
Posted by Michael-in-Norfolk at Monday, December 29, 2014

And when was the last time any Christianist Fundamentalist urged a childless widow to marry her brother-in-law? So much for bible-belchers claiming biblical objections to marriage equality, or any other aspect of domestic relations.


Deut. 25:5 If brothers are living together and one of them dies without a son, his widow must not marry outside the family. Her husband’s brother shall take her and marry her and fulfill the duty of a brother-in-law to her.