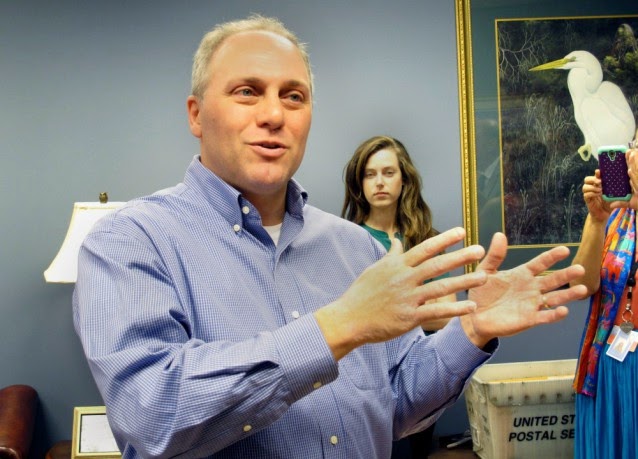 Since the news of his past speaking engagement at a David Duke affiliated white supremacist, anti-Semitic organization broke, GOP Rep. Steve Scalise's (pictured above) explanation has been that "he did not know" it was a white supremacist organization.  From the beginning many believed this excuse was far fetched at best if not outright disingenuous (i.e., a lie).  Now, as Think Progress reports, it looks like the excuse was a lie.  Here are story excerpts:

Two days ago, Slate ran a piece quoting Kenny Knight, a close associate of David Duke, who booked the room for the white supremacist group, known as EURO. Knight claimed that he invited Scalise to speak to the “Jefferson Heights Civic Association, which was largely comprised of elderly people who lived in his and Scalise’s neighborhood.” The meeting of the civic association, Knight said, just happened to be held in the same room as the EURO conference held later that day.

[A]s it turns out, Knight was lying. Not only was Knight a member of the EURO group but “documents filed with the Louisiana secretary of state’s office list him as treasurer…” He is also listed as a member of the group in a 2002 news release for the conference in question, where he was scheduled as a speaker. Asked about the discrepancy and the state document listing him as treasurer of the group, Knight hung up twice on a reporter for The Times-Picayune.

In an interview with the Washington Post, Duke said he “recalled Knight reaching out to Scalise in the weeks before the conference to come and update attendees on state affairs, and that Scalise accepted without reservation.”

The GOP claims to be the party of "Christian values," but truth and honesty aren't part of the GOP's values. Scalise needs to resign as House majority whip.
Posted by Michael-in-Norfolk at Friday, January 02, 2015