Can the Internet Defeat Vladimir Putin? 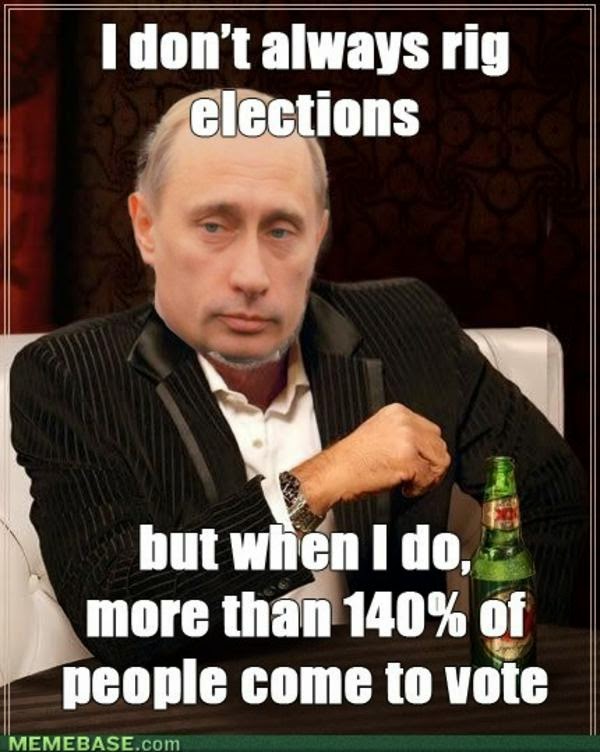 Russian dictator Vladimir "Adolph Hitler" Putin continues to mimic the tactics of Adolph Hitler in the 1930's and Joesph Stalin from the mid-1930's through the date of his death.  These tactics include controlling the news media, shutting down opposition news outlets and kangaroo trials for political opponents.  The one factor that has changed the playing field is the Internet.  Yes, it can be blocked for a time, but as China has discovered, for every effort to shut out news and the truth, there are computer geeks who will quickly devise a work around.  A column in the New York Times ponders whether the Internet will lead to Putin's eventual undoing.  If it does, it will have done Russia and the world a huge favor.   Here are some article excerpts:

ON Tuesday, a court in Moscow convicted Russia’s top opposition blogger, Aleksei A. Navalny, of criminal fraud. Mr. Navalny, who has been under house arrest for nearly a year, was given a suspended sentence and spared jail time. His younger brother Oleg, however, was sentenced to serve three and a half years. Aleksei Navalny is an anti-corruption activist and outspoken critic of President Vladimir V. Putin, and the verdicts were seen as a cynical strategy to punish him without turning him into an imprisoned martyr.
Mr. Navalny responded furiously, rallying protests in Moscow’s Manezh Square. He even defied his house arrest to attend the demonstrations himself, which led swiftly to his detention and a return to his home.


Mr. Navalny, a 21st-century Russian dissident, presents a new kind of threat to the Putin regime. He was the first Russian activist to have used the Internet as an effective tool of political resistance. In the past, he and his followers have demonstrated that Russia’s opposition activists are not simply “virtual,” but are also capable of getting people onto the streets.

This is a relatively recent phenomenon. For a long time, the Internet didn’t matter in Russia, at least as a weapon of the opposition. . . . . The Internet just reflected offline realities. Most Russians didn’t think they had any impact on their political situation. Elections were viewed as predetermined. Opposition protests were sparsely attended, and often ended with protesters’ being rounded up by the police. The Internet, simply by existing, was not going to change this overall picture.

Enter Mr. Navalny, who understood that his countrymen were tired of pointless street demonstrations. He decided to show Russians that they could make a difference, from the comfort of their homes. . . .  He didn’t ask people to revolt, he just called on them to file online complaints. He provided detailed instructions for appealing to the authorities, and asked his supporters to report everything from unrepaired potholes to suspicious government contracts. Success is a powerful antidote to apathy. Years of these campaigns showed individual Russians that together, they could get things done.

[T]he Kremlin didn’t really worry about online activism until late 2011 and early 2012, when tens of thousands of Russians took to the streets in antigovernment protests that were largely organized on social media. This finally got Mr. Putin’s attention.  . . . . Moscow was facing the largest demonstrations since the fall of the Soviet Union.

Now, Russian authorities have greater powers to block sites, allegedly in an attempt to protect children from harmful content. Popular bloggers are required to register with the government. Facebook and Twitter could be blocked entirely if they refuse to comply with a new law that requires them to keep data on their Russian users on local servers. Mr. Putin also passed a law to criminalize street protests.

The opposition’s main obstacle will continue to be public apathy, which is an authoritarian government’s best protection. The Internet alone is not enough to overcome it.


But something else could: the flailing Russian economy. An economic crisis caused by declining oil revenue, Western sanctions and a plummeting ruble could make Mr. Putin more vulnerable and eventually spark a mass uprising. And thanks to the Internet, Mr. Navalny and his supporters will have the tools to take advantage of a revolutionary situation if it does arise.

I am currently reading a book on the daughters of the last Russian Tsar, Nicholas II.  Nicholas and his wife, Alexandra, were clueless and in way over their heads when it came to running a sprawling empire.  Moreover, much of their ill-advised political motivations came from religious brainwashing - brainwashing that focused on maintaining the political/religious status quo, especially for the Russian Orthodox Church, which enjoyed immense privileges and shook down the ignorant  for money that they could ill-afford to give to the Church.  In contrast, Putin is motivated by personal greed and megalomania.  The man is despicable.
Posted by Michael-in-Norfolk at Wednesday, December 31, 2014