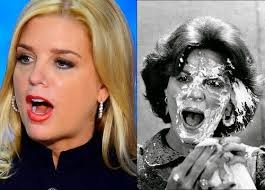 This time of year we see many reviews of the events of the year and people deemed "winners" and "losers" of the year.  In the category of "losers," The Tampa Bay Times has named Pam Bondi, GOP Attorney General of Florida, the number 1 loser of 2014.  She was also dubbed a "modern day Anita Bryant."  As I and other LGBT bloggers have noted, Bondi has shamelessly prostituted herself to the Christofascsists and taken every possible anti-gay step possible in order to win the hearts and votes of gay haters.  Here are highlights from the editorial:

Democratic National Committee chairwoman Debbie Wasserman Schultz and her hand-picked Florida Democratic Party chairwoman, Allison Tant, could be the most logical losers of 2014 given the drubbing Democrats took. But we tend to look more forward than backward and view each year's winners and losers more in the context of how the past year will affect politics in the coming year.
So, drum roll please …

Loser of 2014 - Pam Bondi. It's hard to imagine how someone who won re-election so handily (rival George Sheldon could not afford a single TV ad) could emerge from 2014 more wounded and diminished as our Republican attorney general. Put aside the unseemly junkets funded by groups seeking to influence her. Bondi's clumsy communication skills and relentless defense of Florida's gay marriage ban have made her a modern-day Anita Bryant. Antagonizing Florida's gay voters over same-sex marriage and Hispanic voters over immigration reform ensures Bondi has a bright political future ahead of her — if she moves to Mississippi.

It should be noted that Bondi's behavior is actually all too typical of today's Republican Party and its supposed leaders: they go to any and all lengths to prostitute themselves to a hate-filled, ignorance embracing, dwindling demographic with seemingly no thought about the long term ramifications of their policies of exclusion and open embrace of demagoguery.

Posted by Michael-in-Norfolk at Sunday, December 28, 2014

The thing that makes people like this even more scary is the fact that there are enough people who think like them that they get elected.