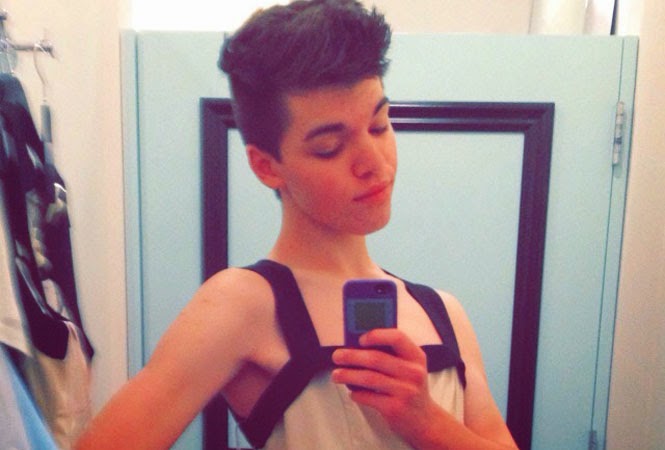 I am on record as calling LGBT youth being raised by Christian fundamentalist parents a form of child abuse.  The heartbreaking suicide of 17 year old Leelah Alcorn over the weekend underscores this reality.   Leelah, who born male in a moving suicide note blamed her Christian parents for her decision to end her tortured life.  Rather than accept her or get her the legitimate therapy she needed, her parents forced her to see "Christian therapists" who shamed her and relied on the supposed teachings of the Bible, that book responsible for so much bloodshed and misery over the centuries, to try to force her to reject what she knew was her true self.  In my view, her parents (and the "Christian therapists") should be indicted, tried and convicted of felony child abuse.  Leelah's sad story underscores why "ex-gay" therapy needs to be banned nationwide and quacks parading as "Christian therapists" need to be put out of business. The Daily Mail looks at this sad story.  Here are excerpts:

A transgender teenager who committed suicide by walking in front of a tractor trailer in Ohio left a heartbreaking letter in which she blamed her religious parents.

Leelah Alcorn, 17, died in the early hours of Sunday on highway I-71 in Warren County, Ohio, a few miles from her family home.

The high school student left a poignant suicide note accusing her devout Christian parents of refusing to acknowledge her gender and forbidding her from transitioning.

The suicide note was posted on Leelah's tumblr account through scheduled publishing just a few hours after her death.

The note begins: 'If you are reading this, it means that I have committed suicide and obviously failed to delete this post from my queue.'

Leelah goes on to reveal that her parents refused to allow her to transition and instead took her to 'Christian therapists' who told her that she was 'selfish and wrong'.

'I formed a sort of a “f*** you” attitude towards my parents and came out as gay at school, thinking that maybe if I eased into coming out as trans it would be less of a shock.

'Although the reaction from my friends was positive, my parents were pissed. They felt like I was attacking their image, and that I was an embarrassment to them.

'They wanted me to be their perfect little straight Christian boy, and that’s obviously not what I wanted.'

'On my 16th birthday, when I didn’t receive consent from my parents to start transitioning, I cried myself to sleep.'

It's telling to me that Leelah'sparents said that she was "selfish."  If anyone was selfish, it was her parents who in all likelihood were more worried about what people would think of them than the welfare of their child.  If there is a Hell, her parents deserve to burn in it for eternity.   Here are excerpts for her suicide note:

If you are reading this, it means that I have committed suicide and obviously failed to delete this post from my queue.

Please don’t be sad, it’s for the better. The life I would’ve lived isn’t worth living in… because I’m transgender. I could go into detail explaining why I feel that way, but this note is probably going to be lengthy enough as it is. To put it simply, I feel like a girl trapped in a boy’s body, and I’ve felt that way ever since I was 4. I never knew there was a word for that feeling, nor was it possible for a boy to become a girl, so I never told anyone and I just continued to do traditionally “boyish” things to try to fit in.

When I was 14, I learned what transgender meant and cried of happiness. After 10 years of confusion I finally understood who I was. I immediately told my mom, and she reacted extremely negatively, telling me that it was a phase, that I would never truly be a girl, that God doesn’t make mistakes, that I am wrong. If you are reading this, parents, please don’t tell this to your kids. Even if you are Christian or are against transgender people don’t ever say that to someone, especially your kid. That won’t do anything but make them hate them self. That’s exactly what it did to me.


My mom started taking me to a therapist, but would only take me to christian therapists, (who were all very biased) so I never actually got the therapy I needed to cure me of my depression. I only got more Christians telling me that I was selfish and wrong and that I should look to God for help.


When I was 16 I realized that my parents would never come around, and that I would have to wait until I was 18 to start any sort of transitioning treatment, which absolutely broke my heart. The longer you wait, the harder it is to transition. I felt hopeless, that I was just going to look like a man in drag for the rest of my life. On my 16th birthday, when I didn’t receive consent from my parents to start transitioning, I cried myself to sleep.


I formed a sort of a “fuck you” attitude towards my parents and came out as gay at school, thinking that maybe if I eased into coming out as trans it would be less of a shock. Although the reaction from my friends was positive, my parents were pissed. They felt like I was attacking their image, and that I was an embarrassment to them. They wanted me to be their perfect little straight christian boy, and that’s obviously not what I wanted.


So they took me out of public school, took away my laptop and phone, and forbid me of getting on any sort of social media, completely isolating me from my friends. This was probably the part of my life when I was the most depressed, and I’m surprised I didn’t kill myself. I was completely alone for 5 months. No friends, no support, no love. Just my parent’s disappointment and the cruelty of loneliness.

I cannot know what it feels like to be transgender, but it has to be far worse than being gay in a homophobic society. With two serious suicide attempts in my past, I can understand how Leelah came to the point where suicide seemed the best solution.  She wanted the pain and misery to stop and not much beyond that.  As for her parents, I hope they come to realize they murdered their child.  As for other "godly Christian" parents who reject their LGBT children, they have only my utter contempt.  I hope with time society as a whole will come to treat them with contempt and derision and make them social outcasts.  They deserve such treatment.