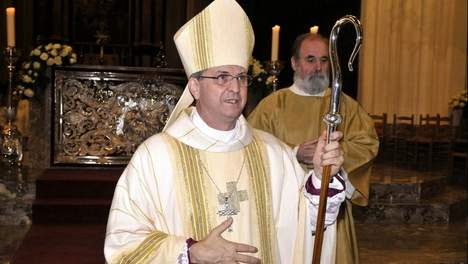 The Roman Catholic Church has always lead up the rear guard resisting social change be it in terms of contraception, women's rights, divorce, and, of course, gay rights. And in every instance, the Vatican's intransigence to change has cost the Church membership.  It's not without reason that so many raised as Catholics sever their relationship with the Church.  Gay rights and gay marriage are but the latest issue to pit the bitter old men in Rome against the views of the younger generations and parents and family members who simply no longer will stand for the Church's denigration of their  gay children, siblings, etc.  Bishop Johan Bonny of Antwerp, Belgium (pictured above), seemingly understands the corrosive and suicidal element that the Church's opposition to gays poses.  His solution? The needs to give ecclesiastical recognition to gay relationships.  Here are highlights from the National Catholic Reporter:

Bishop Johan Bonny of Antwerp, Belgium, has called for ecclesiastical recognition of gay relationships, according to an interview published in De Morgen, a Belgian newspaper, on Dec. 27.  The official teaching that the Catholic church can recognize only male-female committed relationships has to change, Bonny said.

"There should be recognition of a diversity of forms," he said. "We have to look inside the church for a formal recognition of the kind of interpersonal relationship that is also present in many gay couples. Just as there are a variety of legal frameworks for partners in civil society, one must arrive at a diversity of forms in the church. … The intrinsic values are more important to me than the institutional question. The Christian ethic is based on lasting relationships where exclusivity, loyalty, and care are central to each other."

Bonny made headlines in September when he issued a letter to the Vatican in preparation for the Synod on the family in October. At that time, Bonny stressed that the church urgently needs to connect with contemporary society, showing more respect for homosexuality, divorced people and modern kinds of relationships.

“In his or her life,” he said, “everyone has to deal with relationships, friendship, family, and children's education. We should not deny that dealing with these issues within the church has brought injuries and traumas. Too many people were excluded for a long time."

Bonny stressed openness, the need for further reflection and the danger of getting wrapped up in a complex ideological discussion. He stressed as well that he is a strong advocate for recognizing a diversity of relationships that arise from serious reflection on practical pastoral realities.

Professor Rik Torfs, canon law expert and rector of the Catholic University of Leuven, warned that one should not minimize Bonny’s approach.

"Do not underestimate the significance of this,” he said. “Bonny advocates a change from principles long held as unshakable, something no bishop could have done under the dogmatic pontificates of Pope John Paul II and Pope Benedict XVI."

Most observers see him becoming the next archbishop (and cardinal) of the Malines-Brussels archdiocese, when the incumbent, Archbishop André-Joseph Léonard, offers the pope his letter of retirement, at age 75, in May.

Perhaps driving Bonny's call for change is the reality that not a single priest was ordained for Antwerp in 2012, 2013, or 2014.
Posted by Michael-in-Norfolk at Saturday, January 03, 2015