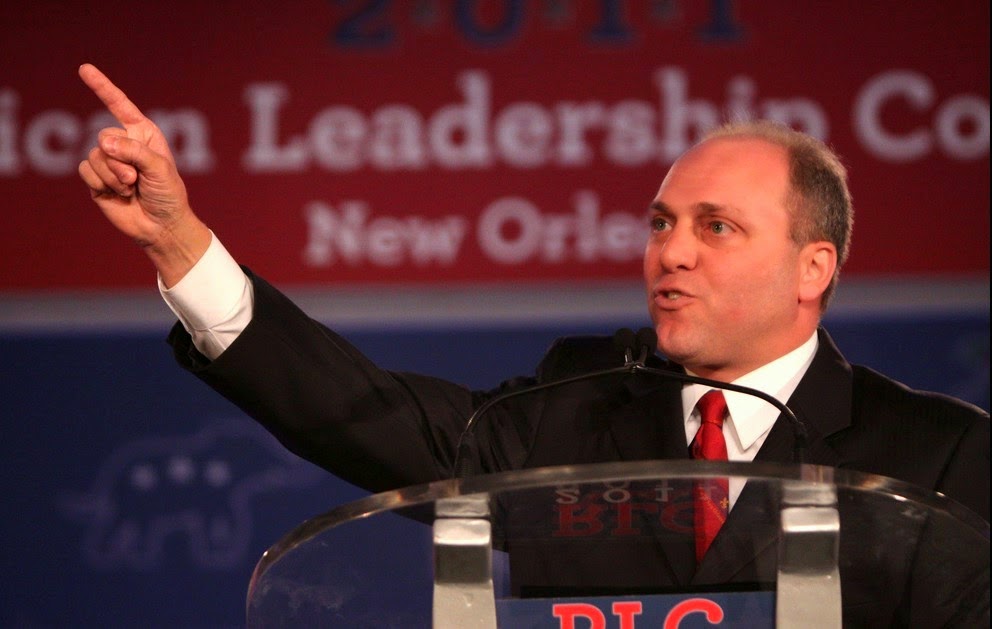 Try as it might to pretend that it is not the party of choice of white supremacists and flaming racists, the Republican Party just cannot escape the reality of the actions and affiliations of its members and elected officials.   A case in point? Rep. Steve Scalise (R-La.), the newly elected House of Representatives majority whip, who has belatedly admitted that he attended and spoke at a white supremacist convention some years back.   Scalise's defense/excuse? Ignorance - he did not know what the group was all about even though press coverage makes that hard to believe.  Also, is Scalise so stupid that he hasn't heard of the term "Google search"?  One has to wonder whether Scalise thought he could keep this information hidden from view or if he merely thinks voters are too stupid to check out his past.  The Washington Post looks at Scalise's admission which ought to give minority voters of all races pause.  Here are highlights:

Rep. Steve Scalise (R-La.), the newly elected House majority whip, acknowledged Monday that he spoke at a gathering hosted by white nationalist leaders while serving as a state representative in 2002, thrusting a racial controversy into House Republican ranks days before the party assumes control of both congressional chambers.

The 48-year-old Scalise, who ascended to the House GOP’s third-ranking post earlier this year, confirmed through an adviser that he once appeared at a convention of the European-American Unity and Rights Organization.

That organization, founded by former Ku Klux Klan leader David Duke, has been called a hate group by the Southern Poverty Law Center.

In a statement, Scalise’s spokesperson Moira Bagley emphasized that the then-state lawmaker was unaware at the time of the group’s ideology and its association with racists and neo-Nazi activists.

Scalise’s political circle worked furiously late Monday to quell the storm, with his confidants e-mailing reporters and House members, assuring them that Scalise did not know the implications of his actions in 2002, and described him as a disorganized and ill-prepared young politician who didn’t pay close attention to invitations.

Scalise’s defense — that he was not fully cognizant of the group’s leanings and the nature of the meeting — contrasts with the local press coverage generated by the Duke-coordinated conclave that spring.

The Gambit Weekly, an alternative publication in New Orleans, wrote days before the conference that the hotel distanced itself from Duke’s group and expressed its discomfort.

Former Mississippi governor Haley Barbour (R), said in an interview Monday that Duke’s views are “awful and indefensible and wrong,” but declined to comment on Scalise’s situation.

Rep. Joaquin Castro (D-Tex.), a rising star in the Democratic Party considered among the most prominent Hispanics in Congress, said that if the incident is true, it “raises serious questions about the judgment of an elected official who would eagerly agree to join a group like that for an event.”

“It’s hard to believe, given David Duke’s reputation in Louisiana, that somebody in politics in Louisiana wasn’t aware of Duke’s associations with the group and what they stand for,” Castro said in a phone interview. “If that’s the case and he agreed to join them for their event, then I think it’s a real test for Speaker Boehner as to whether Congressman Scalise should remain in Republican leadership.”

Me thinks Scalise is both a racist and a liar -traits all too prevalent in today's GOP.
Posted by Michael-in-Norfolk at Monday, December 29, 2014

As others have noted, the name of the organization, European-American Unity and Rights Organization, did not by itself suggest to this POS that maybe it was not quite the same as the League of Women Voters?

And his subsequent claim that as a Catholic he couldn't be a White Nationalist? Like Pat Buchanan can't be?