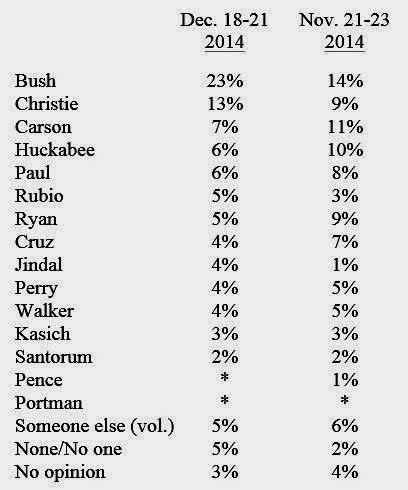 Based on a new CNN/ORC poll, it doesn't take much to be frontrunner for the GOP 2016 presidential nomination.  The poll which followed a similar poll last month placed Jeb Bush in the lead with a meager 23% of respondents naming him their choice for 2016.  Meanwhile between them, the utterly delusional Ben Carson, Mike Huckabee and Rick Santorum had support of 15% of the respondents.  Here are highlights from CNN:

Jeb Bush is the clear Republican presidential frontrunner, surging to the front of the potential GOP pack following his announcement that he's "actively exploring" a bid, a new CNN/ORC poll found.


He takes nearly one-quarter — 23% — of Republicans surveyed in the new nationwide poll, putting him 10 points ahead of his closest competitor, New Jersey Gov. Chris Christie, who tallied 13%.

Ben Carson comes in third, with 7% support, and Sen. Rand Paul and former Arkansas Gov. Mike Huckabee are both tied for fourth with 6%. That marks a drop in support for all but Christie and Bush from the last CNN/ORC survey of the field, conducted in November.

GOP primary voters are about evenly split on whether his support for allowing some illegal immigrants to stay in the United States makes them more or less likely to support him, or has no difference on their opinion of him.  Forty-two percent say his description of illegal immigration as an "act of love" make them less likely to support Bush, but another 39% say it makes no difference to them.

Out of all of the seven head-to-head GOP match-ups with Clinton tested, Bush fares the best, trailing her by just 13 points. She takes 54% support to his 41% support.

Posted by Michael-in-Norfolk at Monday, December 29, 2014