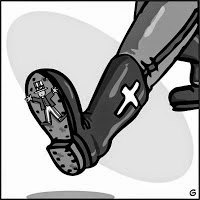 I've written about Frank Schaeffer before. His father was a famous founder of the Christofascist forces that have infected America and the base of the GOP.  Frank Schaeffer has a piece in Salon where he laments his past work with his father and what conservative Christians have done and continue to try to do to America and society. The most important part of his message is what the Christofascist controlled Republican Party still seeks to do.  Here are excerpts:

[T]the American right is not about politics as most people understand it but about religious absolutes. As the New York Times noted on the single-minded desire to subvert President Obama’s overhaul of the broken immigration system, “And in their most audacious plans, Tea Party groups are preparing to recruit challengers to run against high-profile Republicans they accuse of betraying them — as they did when they toppled Eric Cantor, the former House majority leader.”

This zealous negativity has a long history. I was part of it as the nepotistic sidekick to my religious-right evangelist father. The 1970s Evangelical anti-abortion movement that Dad (Evangelical leader Francis Schaeffer), C. Everett Koop (who would be Ronald Reagan’s surgeon general) and I helped create seduced the Republican Party. We turned it into an extremist far-right party that is fundamentally anti-American. There would have been no Tea Party without the foundation we built.

You can’t understand why the GOP was so successful in winning back both houses of congress in 2014, and wrecking most of what Obama has tried to do, unless you understand what we did back then.

[The] strategy was simple: Republican leaders would affirm their anti-abortion commitment to evangelicals, and in turn we’d vote for them — by the tens of millions. Once Republicans controlled both houses of Congress and the presidency, “we” would reverse Roe, through a constitutional amendment and/or through the appointment of anti-abortion judges to the Supreme Court or, if need be, through civil disobedience and even violence, though this was only hinted at at first. In 2016, the dream we had will become a reality unless America wakes up. The Republicans are poised to destroy women’s rights. They have a majority on the Court to back them up.

No one seemed to notice (or mind) that the Republicans weren’t really doing anything about abortion other than talking about it to voters. And by the mid- to late 1980s the cause shifted: We Evangelicals paid lip-service to “stopping abortion,” but the real issue was keeping Republicans in power and keeping evangelical leaders in the ego-stroking loop of having access to power.

Fast-forward 30 years to the early 21st century: The messengers, leaders and day-to-day “issues” changed. For instance, we were into taking away a woman’s right to choose. Today it’s about gay bashing and denying climate change — and now the nakedly racist anti-immigrant movement threat is part of the reaction to the black man in the White House.

Mark my words, the subtext to the GOP assault on us in 2016 will be religious extremism — again. And now it has a racist twist. Look at the right’s reaction to the events in Ferguson. Look at the continuing anti-Obama ugliness far past mere political difference. For the Republicans the next election won’t be about politics. it will be a holy war — again.