Anti-Gay Bigotry Kicks Off 2015 in Florida 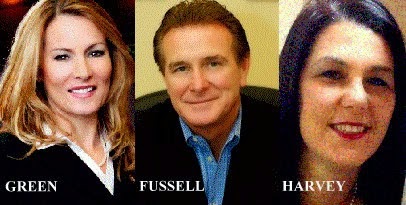 The "godly Christians" who hold the office of county clerk in Duval, Clay, and Baker Counties, Florida, have kicked off 2015 with a display of the pervasive sense of special rights and being above the law that is a hallmark of conservative Christians across the nation.  These three bigots (pictured above) have declared that they will end all courthouse weddings rather than have same sex marriages performed.  All three need to be cited with contempt of court, do some jail time and be removed from office.   The fellow bigots on the staffs also need to join the ranks of the unemployed.  A harsh example needs to be made that Christians are bound by the same laws as the rest of the citizenry and, if one cannot respect the legal rights of others, then get the hell out of public office and/or out of the public employment sector. Period.  The Savannah Morning News has details.  Here are highlights:

If same-sex marriage is allowed across the state, Duval Clerk of Courts Ronnie Fussell, Clay Clerk Tara Green and Baker Clerk Stacie Harvey will have no choice but to issue marriage licenses to gay couples. But to avoid performing ceremonies for them, these clerks have decided to end all courthouse weddings.

Fussell says the decision came after a series of discussion with members of his staff who currently officiate wedding ceremonies. None of them, including Fussell, felt comfortable doing gay weddings so they decided to end the practice all together.

“It was decided as a team, as an office, this would be what we do so that there wouldn’t be any discrimination,” Fussell said. “The easiest way is to not do them at all.”

Equality Florida co-founder and chief executive Nadine Smith was shocked to hear that certain counties would stop allowing courthouse wedding because of the possibility gay couples would want to use the service.

“I think it would be outrageous for clerks to change the rules simply because gay couples are getting married,” she said.

Smith, an advocate for gay and lesbian rights, predicted the policy change would backfire and be characterized as spiteful and mean.

Last Valentine’s Day, Fussell personally officiated a mass wedding for 12 heterosexual couples in the courthouse rotunda. He waived the ceremony fee, gave each bride flowers and offered a cupcake reception.

With the possibility that he would be forced to include gay couples who wanted to participate this year, there will be no weddings under the dome or the in the “wedding arbor” room that is most often used for these ceremonies.

Residents of Baker, Clay and Duval counties who want to avoid usual wedding expenses will now have to find a minister or notary to perform the ceremony after they pick up their marriage license, but a place other than the courthouse.


As I said, fire all of these assholes.  No special rights for Christian bigots.

Posted by Michael-in-Norfolk at Thursday, January 01, 2015