The Pope and American Catholics See Climate Change as a Crisis 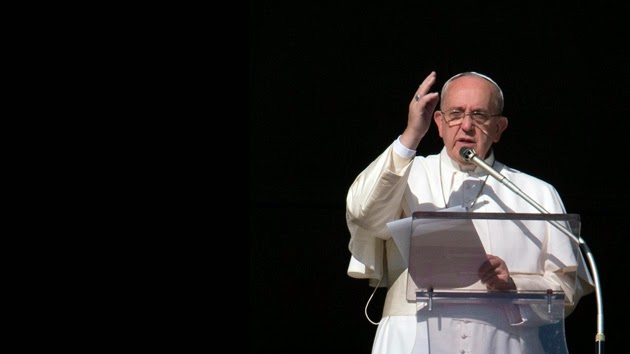 In yet another bad sign for the ignorance embracing Republican Party, the Pope is preparing to release an encyclical—or "papal letter"—that will be sent to churches worldwide which calls for call for action on climate change.  Surveys show that a majority of American Catholics agree with the Pope's assessment of the crisis. No doubt Fox News, GOP Senator James Inhofe, and American fundamentalist Christians will describe all of this as part of an international conspiracy to further the climate change "hoax" as they call it.  Mother Jones looks at the Pope's planned action and Catholic support for it.  Here are excerpts:


Pope Francis, the leader the Catholic Church, is closing out 2014 in his typically headline-grabbing fashion. . . . Next on his list? Climate change.

Over the weekend, the Guardian reported that the pope will issue the first-ever comprehensive set of Vatican teachings on climate change, in the form of an encyclical—or "papal letter"—sent to churches worldwide. He will also personally lobby for climate action action in a series of high profile meetings ahead of the all-important UN global warming negotiations in Paris next year. From the Guardian:

Following a visit in March to Tacloban, the Philippine city devastated…by typhoon Haiyan, the pope will publish a rare encyclical on climate change and human ecology. Urging all Catholics to take action on moral and scientific grounds, the document will be sent to the world's 5,000 Catholic bishops and 400,000 priests, who will distribute it to parishioners. According to Vatican insiders, Francis will meet other faith leaders and lobby politicians at the general assembly in New York in September, when countries will sign up to new anti-poverty and environmental goals.

Mobilizing believers to embrace climate action could be a very big deal, given the sheer number of people who identify as Catholic in the US—around 75 million—he said. "If we had just a fraction of those acting on climate change, it would be bigger than the networks of some of the biggest environmental groups in the US," he said. "That could help change the way we live our lives, and impact our views on public policy."

The impact would be felt beyond Catholicism too, said Mary Evelyn Tucker, director of the Forum on Religion and Ecology at Yale University. She called the forthcoming letter "one of the most important documents on the moral implications of what we are doing to our planet."

[W]ould America's Catholics welcome climate advocacy from the pope? Recent polling by the Public Religion Research Institute and the American Academy of Religion suggests that many would.

** Nearly three-quarters of Hispanic Catholics surveyed agree that climate change constitutes a "crisis" or a "major problem." The same is true for a majority (53 percent) of white Catholic respondents.

** Nearly a quarter (24 percent) of Catholics surveyed said climate change is the "most pressing" environmental issue we face.

** Majorities of all groups surveyed—including 69 percent of Hispanic Catholics and 63 percent of white Catholics—agree that dealing with global warming now will help prevent economic calamities in the future.