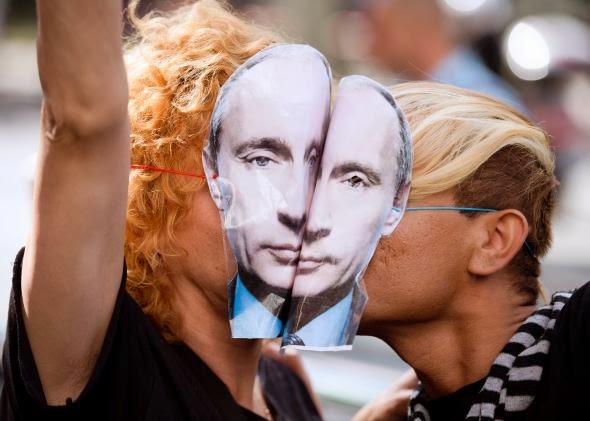 Like the far right in America, in Russia, Vladimir Putin and his henchmen want to recapture the "good old days" of the late 1950's and early 1960's - a time that was good for some but not good for vast numbers of people.  And, like far right politicians in America, Putin has teamed up with far right religious groups (specifically, the Russian Orthodox Church) who have a history of supporting the suppression of civil rights for everyone but themselves.  In this effort, gays in Russia have become the football being kicked about in what a piece in Slate calls a new "gay cold war."  Here are excepts from the piece:

An old new power struggle is underway in Europe. With Russia on one side and the United States and the European Union on the other, the struggle is geopolitical—in Ukraine, violently so. But it is also ideological, a clash of values and cultures at the heart of which is the question of whether societies should integrate or ostracize their LGBTQ citizens. It is Europe’s new gay Cold War.

In countries aligned with the United States and the European Union, the general trend on LGBTQ rights is toward greater equality under the law. In 2014, the United Kingdom (excluding Northern Ireland) became the 10th country in Europe to legalize same-sex marriage, and beginning on Jan. 1, 2015, Luxembourg will be the 11th. In 2013, Croatia, Malta, and Gibraltar made same-sex unions legal. In the coming years, Finland and Estonia will open up legal unions to same-sex couples, while Ireland will hold a referendum on the subject in May 2015.

By contrast, the experience of being queer in Russia today modulates between miserable and brutish. It is illegal, through the legislation on gay “propaganda,” to speak openly of homosexuality in the street or to petition for LGBTQ rights. Gay people are hunted for sport, beaten, and raped—and the government chooses not to respond. The work of LGBTQ organizations is suppressed not only by the propaganda laws but also by legislation on the funding of NGOs, whereby groups involved in “political activity” and in receipt of foreign funding are subject to increased scrutiny from the Russian authorities.

“By putting the government’s stamp of approval on rampant Russian homophobia, [President Vladimir] Putin effectively declared open season on gay people.” Now Russian anti-gay influence is spreading in Europe. After Russia illegally and illegitimately annexed Crimea, its LGBTQ citizens found themselves subject to the anti-gay propaganda law, and the Pride parade scheduled to take place in Sevastopol this summer was canceled.

Russia’s allies in Europe, particularly in the east, are also those least likely to care for the cause of LGBTQ equality. The counterprotests to this year’s Pride parade in Belgrade, Serbia, were widely covered in the Russian media. In Hungary, Prime Minister Viktor Orban condemned E.U. sanctions against Russia, and, according to one observer, his increasingly anti-democratic government “has largely succeeded in advancing conservative values, which [tend] to exclude gay people.” In biology classes in Hungarian schools, students are taught that homosexuality is a mental disorder linked to HIV/AIDS, venereal disease, and risky behavior.

Russia is indeed able to exercise influence through the Russian Orthodox Church, which claims exclusive jurisdiction over all Orthodox Christians living in the republics of the former Soviet Union. Its churches act as forums for hatred of homosexuality on a weekly basis.

Today, the distinction is clear. To align oneself with the United States and the European Union is to accept that one must implement anti-discrimination legislation and protect the rights of minorities—the latter being part both of the Copenhagen Criteria on E.U. membership and the European Convention on Human Rights—and to acquiesce to the use of U.S. money to fund NGOs that promote LGBTQ rights. To avail oneself to Russia as an alternative to U.S. and E.U. influence is to adopt the opposite view and perhaps accept Russian influence on the matter.

The European parties that are most pro-Russian tend also to be anti-gay. UKIP does not support same-sex marriage, while the Front National’s Marine Le Pen took part in the anti-marriage-equality Manif Pour Tous demonstrations that rocked France in 2013.

[T]he annexation of Crimea, the bloodshed in the towns and battlefields of eastern Ukraine, and the awakening of the consciousnesses of Russian minorities in the Baltic states is only one facet of the ongoing struggle in Europe. Just as important is the culture war, a battle where, mercifully, the United States and the European Union have the upper hand, but LGBTQ Europeans are still caught in the middle.

Posted by Michael-in-Norfolk at Monday, December 29, 2014