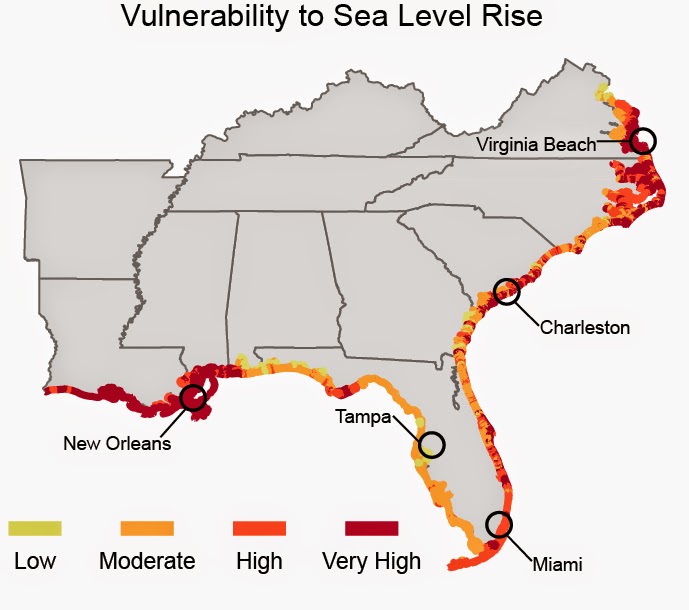 Climate change and rising sea levels may be myths in the minds of Republicans and the Christofascists who cling to biblical fantasies, but for those of us living on the coast, it's all too real and the risks of flooding are all too real.  So far, most cities in the Hampton Roads area - Norfolk is the exception - have done nothing to address the growing problem of higher tides and increased storm damage.  That leaves residents to fend for themselves - the husband and I over the last five years have waterproofed the first floor of our home up to chair rail height, installed three industrial sump pumps and a whole house generator to power the pumps should we lose power, and built our own flood doors to put in place in the event of an approaching hurricane or sever northeaster.  The Virginia General Assembly has done nothing to date other than Republicans forbidding the use of the terms "climate change" and "sea level rise" - "areas of repetitive flooding' is the only allowed term.  An editorial in the Washington Post makes the case that progressive, forward think solutions need to be developed despite GOP intransigence.  Here are some highlights:

“THIS IS really happening,” NASA’s Thomas P. Wagner told the New York Times in May, describing the collapse of ice formations in western Antarctica. Since then, the news has only gotten worse.

According to a new paper in Geophysical Research Letters, the ice loss in a particularly vulnerable Antarctic region has accelerated over the past two decades — to 18 billion tons a year, three times the 20-year average. A Mount Everest’s worth of ice has slipped away every couple of years, researchers from NASA’s Jet Propulsion Laboratory and the University of California at Irvine found, comparing data from four different sources.

All of these findings are bad news for sea levels, which could rise on the high end of scientists’ estimates over the coming decades if Antarctica continues down the path it seems to be on. That would inundate coastal communities in the United States and elsewhere.

As with so many alarming natural hazards, directly attributing some or all of western Antarctica’s ice loss to climate change is still a difficult business. But that is not a reason for comfort. Even in the surprising circumstance that there is no connection in this particular case, humans have no interest in policies that risk raising sea levels further.

Instead of using various uncertainties as excuses to do little or nothing — including questions about how all sorts of natural systems will react to a warmer world — leaders should hedge against major risks, just like big corporations do all the time.

Yet Republicans are gearing up to protect that federal giveaway tooth-and-nail. The Senate’s incoming majority leader, Mitch McConnell (R-Ky.), has promised major fights with the White House on Environmental Protection Agency climate rules. GOP leaders in various states, backed by industry lobbying groups, are coordinating legal and political attacks of their own, aiming for delays and, possibly, cancellation of the rules.

It’s fine if Republicans want to get rid of the EPA’s regulations, which aren’t the cheapest way to cut carbon emissions. But in that case, they should enact another, more efficient anti-carbon policy with similar or greater ambition. Doing anything else would be sheer malpractice — and proof that the GOP does not deserve the public’s trust.