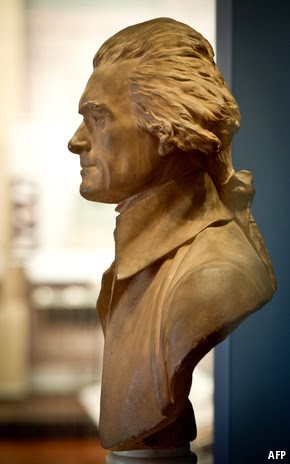 If one listens to the Christofascists - especially quack historian David Barton - America was founded as a "Christian nation."  The truth, of course, is very different and, as typically is the case, the Christofascists are engaging in lies and revisionist history at best.  The reality is that the Founding Fathers viewed the intertwining of religion and government with deep suspicion having seen the horrors of religious wars in Europe from a much closer perspective than those of living 239 years later.  Christofascists who try to twist Jefferson's beliefs always conveniently ignore his "Jefferson Bible" which deleted the Old Testament entirely and excluded of all miracles by Jesus and most mentions of the supernatural, including sections of the four gospels which contain the Resurrection and most other miracles, and passages indicating Jesus was divine.  A piece in The Economist looks at Jefferson's role in setting America on the path to religious freedom that is diametrically opposite to the goals of the Christofascists.   Here are excerpts:

IF THERE is one individual who first gave expression to the American ideal of freedom, and religious freedom in particular, it was Thomas Jefferson. Indeed, the third president himself had very clear ideas on his role in history. He laid down that his tombstone should record three achievements: his authorship of the Declaration of Independence; the statute of religious freedom in his home state of Virginia; and the establishment of the University of Virginia.

Nobody questions Jefferson’s decisive part in establishing liberty of belief. But almost everything else about the statesman’s complex attitude to metaphysical matters has been argued over furiously, and the arguers have plenty of raw material. In the course of American history, “freedom of religion” has itself become a kind of religion, and Jefferson’s words, including the 18,000 letters he wrote during his 83 years of life, serve as a kind of holy writ. To this day, many of the bitterest ideological battles raging across America (over prayer in schools, creationism, religious entitlements at work, and so on) are conducted in the name of different visions of religious liberty.

[S]ecularists and religious sceptics point with relish to Jefferson’s utter contempt for “priestcraft” and religious power structures of all kinds. Religious believers can retort by stressing his reverence for Jesus as a moral teacher and reformer, and his clear belief in a supreme or providential power.

A new book on Jefferson’s religion, “Doubting Thomas”, steers a middle course. On one hand, it squarely accepts that especially after 1800 (in other words, during his presidency and above all, in retirement) Jefferson explicitly renounced many tenets of traditional Christianity. His enquiring and “enlightened” mind had no time for unfathomable mystery. If the idea of one God in three persons was beyond human understanding, it must be wrong. He was exasperated by elaborate theological systems and their authors, from the early church father Athanasius to the Protestant thinker John Calvin. Jefferson disliked the Calvinist notion of “salvation by faith alone” and was inclined to the opposite view; people should be rewarded for what they do, not what they believe. His classically trained intellect led him to the view that diversity of belief should be welcomed, not condemned or punished.

[Jefferson] took a benign view of all forms of Christianity, as long as they did not oppress others, or aspire to political power. Although the founder's political opponents accused him of being an infidel, Jefferson never ceased to have a rich and warm web of relationships with many clergy, mostly traditional ones.

He had a deep, visceral loathing for government-backed religion, but he also believed in the free exercise of faith, with the emphasis on free. Holding those two principles in tension wasn’t easy for Jefferson, and it hasn’t been easy for any subsequent generation. Nor will his legacy ever provide any simple answers.

I suspect Jefferson would have little nice to say about Mike Huckabee, Rick Santorum, and other Christofascists who seek to impose their toxic form of Christianity on all and deprive constitutional protections to non-true believers.
Posted by Michael-in-Norfolk at Sunday, January 04, 2015